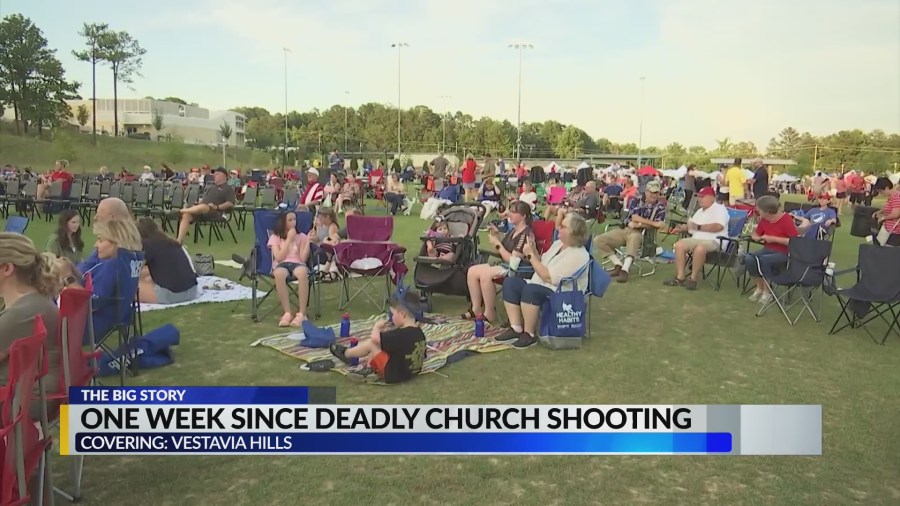 VESTAVIA HILLS, Ala. (WIAT) — Vestavia Hills continues to mourn the loss of three community members who were killed in a shooting at St. Stephen’s Episcopal Church last Thursday.

On Thursday, the community celebrated America’s birthday a week early while remembering all the victims at the city’s I Love America Night on its 40th anniversary.

Mayor Ashley Curry opened the celebration by remembering all three victims and thanking first responders for their efforts last week.

“As a community, we are broken-heartened and saddened by the events of last Thursday,” Curry said.


Inmate that escaped in stolen ambulance steals car in Cullman

A prayer and moment of silence were held to remember everyone involved.

Roy Brook stands guard at these kinds of events because he, too, loves America. Since 2016, he has been going to celebrations and funerals of community members.

“We’ve all got that on our hearts and on our minds right now,” Brook said. “Those three folks would want them to keep moving. As much of a tragedy as it was, a criminal wins when people stop.”

Jane Pounds, the last victim of Thursday’s tragedy at St. Stephen’s Episcopal Church was laid to rest earlier in the day. Sarah Yeager and Bart Rainey’s services were held on Wednesday.

“It’s tragic that you go to church and that happens at church, but that’s the world that we live in, a broken world,” Vestavia Hills resident Beverly Kracke said.

Kracke knows some of Pounds’ family. She said she was happy to see extra police officers at the celebration.

“We appreciate the Vestavia Police,” Kracke said. “They do a great job at being present, particularly at stuff like this.”

Vestavia Hills resident Lauren Jones said she is happy to see everyone come together.

“We’re glad to see that people are glad to be around each other because I would think that would make people really nervous, especially in a big group like this,” Jones said.

According to Vestavia Hills residents, the community is healing one step at a time.

“We just gotta own it, you know? We just gotta be out and be salt in light and not let fear rule,” Kracke said.

St. Stephen’s Episcopal Church has started a prayer ribbon campaign that the entire community is invited to participate in.