PHOENIX – Drivers may not know what catalytic converters do, but it’s clear that they’re valuable. Thefts of the emissions-control devices from under vehicles are skyrocketing across the country, authorities say.

The National Insurance Crime Bureau reports that the number of catalytic converter theft claims to insurance companies jumped from 3,389 in 2019 to 14,433 in 2020 – a 325% increase.

Arizonans reported 2,046 thefts in 2021, an increase of 1,340% over 2019 and a spike second only to Colorado, according to an analysis by BeenVerified, which reports on public data.

And in May, Phoenix police found 1,200 catalytic converters in a storage unit after investigating a crime ring, the Associated Press reported.

Deterring and prosecuting catalytic converter theft is difficult because they don’t come with a serial number or other distinguishing characteristics, so there’s no way to prove a stolen converter belongs to someone else.

But there are steps you can take. Catalytic converters can be “hardened” to deter theft, and a unique number can be acid-etched onto the converter to increase the chance of recovering it if stolen.

In addition, police recommend that drivers be intentional about where they park.

Catalytic converters contain precious metals, such as platinum, palladium and rhodium, which are valuable on the black market and make them a target for thieves. Replacing one can cost more than $1,000, according to the National Insurance Crime Bureau.

The bureau tracked 26 states in 2021 that proposed legislation to combat converter thefts, and in 2022, Arizona joined the list.

The law, signed by Gov. Doug Ducey in May, makes it unlawful to purchase or sell catalytic converters in many instances outside garages and auto parts stores, and requires anyone who buys a used converter to register the transaction with the Arizona Department of Public Safety. People who solicit or advertise unregistered converters can be fined up to $4,000.

The law also gives police more power to investigate scrap metal businesses and requires scrap buyers to mark a legally bought converter with the serial number of the car and keep it in its original condition for a week.

Sgt. Brian Bower, Phoenix Police Department spokesperson, said one of the best deterrents is to be more intentional about parking locations and “making sure that you’re parking your vehicle in a well-lit area. If you know that there’s surveillance cameras nearby, definitely work within view of those surveillance cameras.”

Bower said police also work with pawn shops and scrap metal facilities to recover stolen converters and investigate who is stealing them.

Courtesy Chevrolet in Phoenix offers car buyers a way to mark the catalytic converter with a unique number that’s registered to the vehicle.

“What it does is it marks a catalytic converter,” said Jason Church, chief operating officer at Courtesy Chevrolet. “In the event that there is a theft, the police force can look it up on the database, type in the serial number and tie it back to the actual car that was stolen. So you have a lot more accountability, a lot more prosecutions.”
A downside to Safecat is that it doesn’t prevent theft per se. However, potential thieves may recognize there’s a higher chance of being caught, which could deter them from stealing the converter. 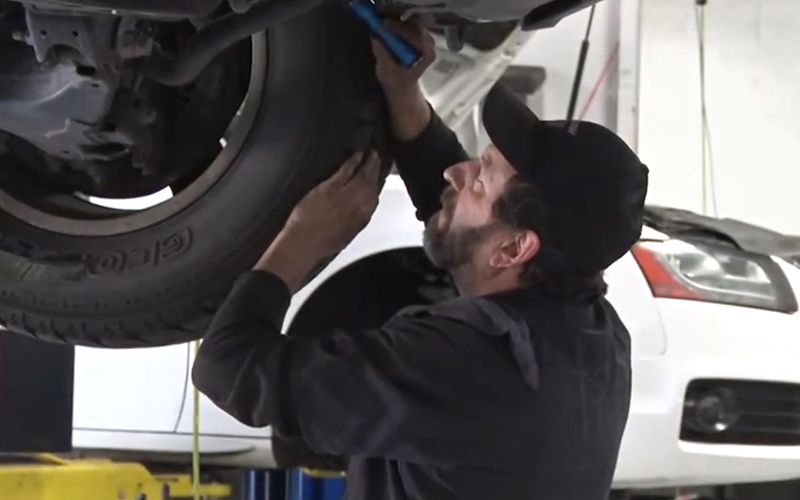 A common way to deter such theft is to attach a metal cage or box around the catalytic converter, making it more difficult and time intensive to cut away with the tools most converter thieves use. But they’re also difficult to install and can cost $500 to $750.

Another approach is to wrap a wire around the converter and attach the wire to the vehicle’s frame. The wire is difficult for thieves to cut, but not as difficult as a metal cage or box. However, the added time it would take to remove can be a deterrent in itself.

“There’s a lot of small things that individual property owners can do to help protect themselves. … It goes to just any kind of property crime,” Bower said, emphasizing securing personal property, parking in well-lit areas and putting personal markings on high-value objects.

“Those are all small things that can really help our investigations out, find the people responsible for it and be able to provide the stolen property back to the victims.”