Dana Dumas made a splash in metro Phoenix 11 years ago when she started a small-batch cookie company. Since then, the chef and baker has continuously expanded her culinary reach in the Valley. She now owns SugarJam The Southern Kitchen, a popular north Scottsdale breakfast, brunch, and lunch spot that often garners long waits on weekends. The restaurant features a bakery fully stocked with tasty treats including those famous cookies and her saught-after pies.

Here, Dumas shares her personal recipe for the seasonal pie that flies off her shelves this time of year. 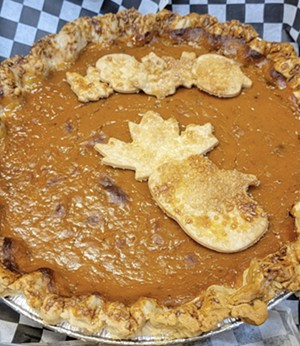 Preheat the oven to 350 degrees.

Whether using a homemade or uncooked pie crust, prick the bottom with a fork to allow steam to escape. Fill it with dried beans or pie weights. Crimp and cover the edges with aluminum foil. Bake at 350 degrees for six minutes. Allow to completely cool before filling.

To make the pie:

Whisk together the evaporated or whole milk, sweetened condensed milk, and vanilla, and set aside. In a separate bowl, combine all the spices, salt, and cornstarch and set aside.

Scoop the pumpkin puree into the bowl of an electric mixer with the whisk attachment. Fold in three of the four eggs and the milk mixture. Whip it until well combined.

Add the brown sugar and the spice and cornstarch mixture and beat until fine. It will be liquidy but don’t worry, that’s what you want.

In a small bowl, whisk the remaining egg with one tablespoon of milk to make an egg wash.

Place the cooled crust onto a baking sheet large enough to catch any drippings. Pour the filling into the pie crust. Next, brush the edges of the crust with the egg wash. Finally, cover the edges with aluminum foil. This helps prevent the exposed edges from burning while the pie cooks.

Now comes the hardest part, Dumas warns. Carefully move the baking sheet with the pie from the counter into the preheated oven. If any of the filling spills onto the crust, remove it by gently dabbing it off with a wet paper towel.

Bake for an hour, checking it at 50 minutes. Bake until an inserted toothpick comes out clean. At that point, remove the aluminum foil from the exposed edges and bake for another 5 minutes to give it a rich golden brown color.

Remove the pie from the oven and place it on a heat-safe counter surface and allow it to cool to room temperature. Allow the pie to completely cool before putting it into the fridge otherwise, the filling will seize up, shrink, and pull away from the edges. Store it in the fridge overnight.

Bring the pie out at least an hour before serving. Serve with vanilla bean ice cream or fresh whipped cream.