PHOENIX – A decision by the Phoenix City Council to cancel all sports tournaments through February divided a youth sports community and left organizers scrambling for solutions.

The council voted 7-2 on Wednesday to cancel all sports tournaments in the city through February, due to concerns about COVID-19.

Some tournament organizers have canceled events. Others are relocating competition to nearby communities.

“We are going to the cities that are still allowing us to operate at this point,” said Kyle Rogers, organizer of the Attitude Is Free Classic youth baseball tournament that was scheduled to begin today in Phoenix as well as Scottsdale and Mesa.

The council’s decision followed an animated debate that ended with council members Sal DiCiccio and Jim Waring voting against the majority.

The discussion got heated at times.

About 40 minutes into the meeting, as DiCiccio questioned epidemiologist Dr. Saskia Popescu about relevant COVID-19 data, Phoenix mayor Kate Gallego questioned whether DiCiccio was “needing (to see dead) bodies before we act.” 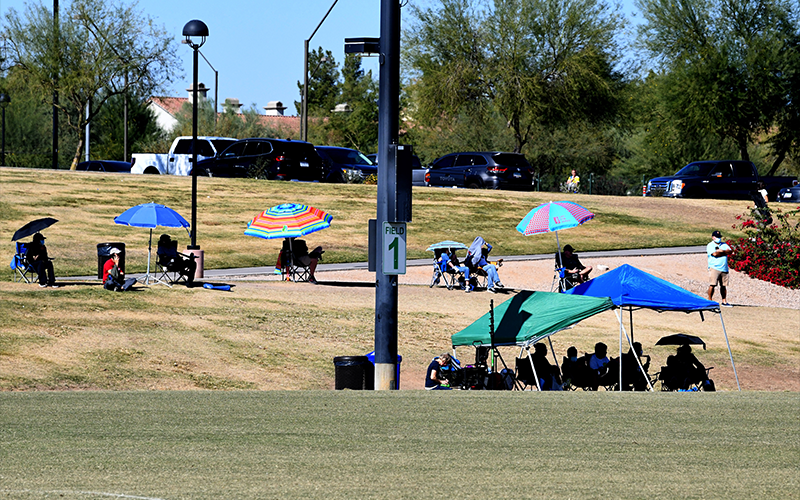 Arizona youth soccer fans often choose to socially distance themselves from others when watching matches. (Photo by Kevin Hurley/Cronkite News)

The council also heard from parents with kids affected by the stoppage of play, several of whom expressed concerns about depression and the state of their kids’ mental health.

In the end, the council decided that shutting down play citywide would be the best option for them to protect the public from the dangers of COVID-19.

The decision immediately drew mixed reactions from the general public and those directly affected by the shutdown.

Many took to social media to voice their support for the council’s decision.

Others expressed the opinion that the shutdown was an excessive measure that would negatively affect kids’ mental health and the local economy.

The Salvation Army Christmas Angel youth soccer tournament – scheduled for Dec. 4-6 – was one of the first events impacted by the council’s decision.

With less than two days to react to the announcement, AzSoccerEvents tournament director Chris McConkey decided she had no choice but to cancel the tournament.

“No way could I come up with 24 fields that have lights, redo schedules, redo all the referee assigning, everything else that goes behind the scenes, putting up goals, staffing, there’s no way I could have recouped. So it’s very frustrating,” McConkey said.

The Christmas Angel tournament drew 217 teams in 2019 and was expected to draw approximately 270 teams this year.

With the help of Arizona Soccer Association CEO Rick Kelsey, McConkey immediately pivoted and began making alternate plans to fulfill the primary goal of the Christmas Angel program – to collect and distribute toys to Arizona kids and families that would otherwise go without gifts on Christmas.

Kelsey and McConkey took measures to collect toys from the teams that would have participated this weekend, and they established collection points at soccer fields outside of Phoenix that will still be hosting games over the next three weeks.

They’re also taking action to inform the public that they can still participate in the Salvation Army Christmas Angel program by donating toys online or at one of 13 Arizona shopping malls.

“(The tournament cancellation) is not a positive situation, but with Rick’s help, and the state association, we’re going to make it a positive event still,” McConkey said.

Youth baseball tournaments also felt the impact of the shutdown.

Rogers, owner of a company called Baseball Showcase, said he appreciates the balance between public safety and kids’ mental health that local city governments must consider.

“If you listen to the parents that were speaking (at the Wednesday city council meeting), they’re talking about their kids that have been clinically depressed and were seeing therapists,” Rogers said.

Rogers also said that health and safety are top priority for him as a tournament organizer, “For us on our side, running a tournament, you want everybody to be safe.”

Rogers feels that, given his organization’s measures to provide a safe playing environment, the city council could have considered less extreme measures that would still allow tournaments to proceed without jeopardizing public health.

In his role as ASA CEO, Kelsey must now consider the effect the city council’s decision will have on other ASA-sanctioned tournaments.

Seven of the 10 tournaments on the ASA’s December-to-February calendar include games scheduled to be played in Phoenix, and those seven tournaments are expected to draw nearly 2,400 teams.

Kelsey will have to quickly reorganize and reschedule games if those tournaments are to go ahead as planned.

“It’s more work for me and my staff, but we’re gonna do everything we can with the resources we have available to us – fields, cities, and so forth – to provide opportunities for the kids to play,” Kelsey said.

“We’ll work with them (the cities) to see what we can do to make sure we’re safe. We want to continue to build a relationship with the municipalities, so that we can come up with the right solutions to do it in a manner that’s conducive for everybody to keep playing.”

Six Free Things to Do in Phoenix This Week

Vinyl’s Never Out at Phoenix Record Shop The ‘In’ Groove