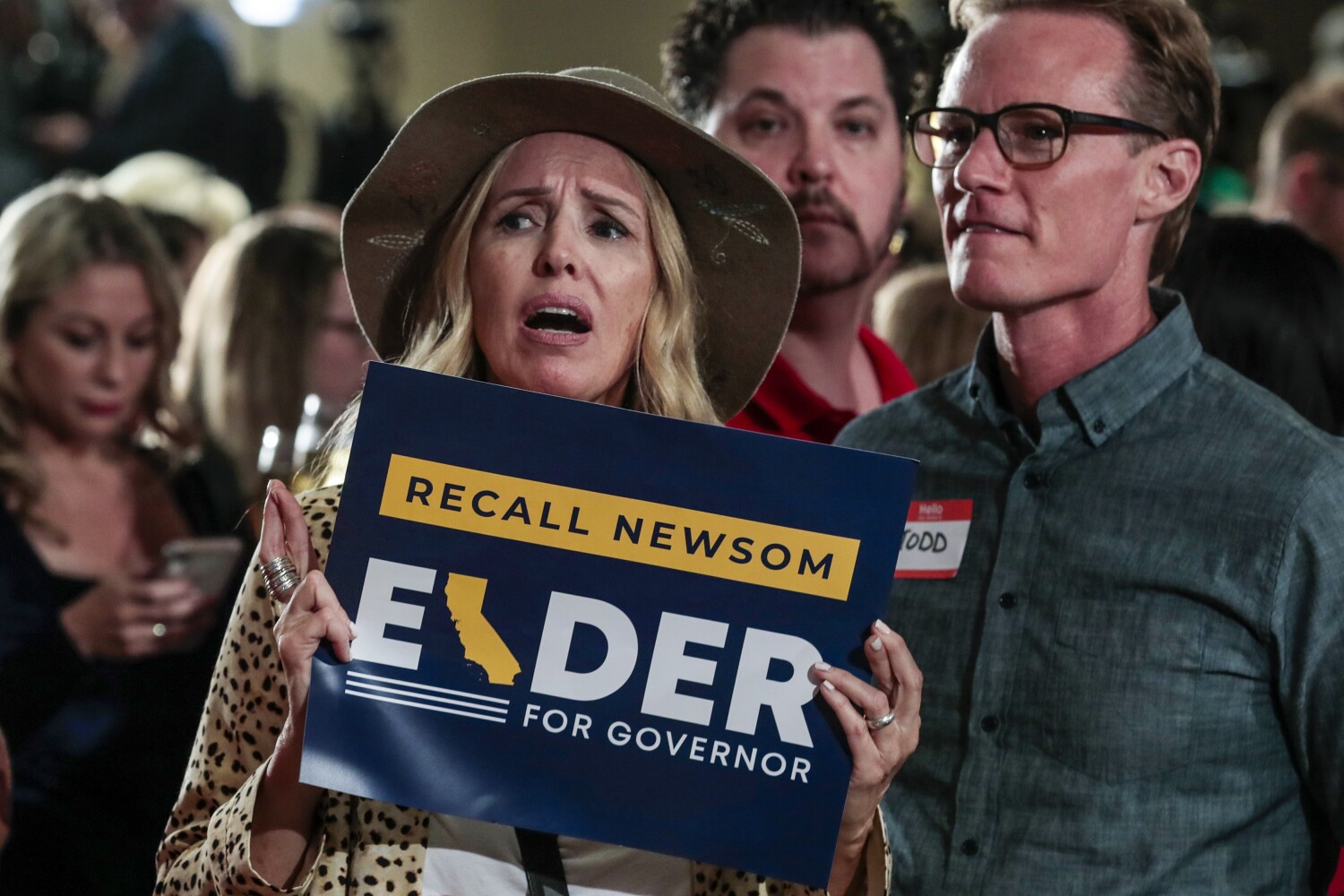 If you’re looking for the best metaphor for how the California Republican Party blew the recall attempt against Gov. Gavin Newsom, look no further than the sight of mixed-martial-arts legend Tito Ortiz knocked out by Anderson Silva in the first round of a boxing match held on 9/11.

This time last year, Ortiz was a rising star for the GOP, the latest celebrity to make a political run as he campaigned for a seat on the Huntington Beach City Council. He ended up getting the most votes of any candidate in city history by espousing the MAGA school of politics — ridicule the libs, proclaim skepticism to coronavirus shutdowns and the pandemic itself and offer vague promises of freedom with little in actual, tangible plans.

But once it came time to actually duke it out in the octagon of democracy? Ortiz went down like a tree meeting a lumberjack.

Instead of building a career as Surf City’s Trump-by-the-Sea, he left office in June after barely half a year, basically claiming the public was too mean to him and his family. Just three months later, Ortiz lay before Silva in the boxing ring, flatter than a tortilla. Why, even Trump was there to witness his acolyte’s demise.

An embarrassing, career-ending defeat is also what ended up happening with California’s gubernatorial recall election. The final numbers haven’t been tabulated yet, but voters overwhelmingly rejected the recall — more than 60% of ballots so far show “No,” with a turnout expected to top well above 50%.

The margin of victory — and how fast the win was called — surprised many onlookers. But those who know the California GOP just yawned and moved on. They knew Republicans would feed the promise of victory to the maw of defeat, period.

For the last quarter-century, state Republicans have acted like the Black Knight in “Monty Python and the Holy Grail,” that poor soul who insisted on fighting even after all his limbs were cut off, describing the amputations as mere flesh wounds, and then left bragging that he earned a draw against King Arthur as His Royal Highness left the squawking stump by the side of the road.

Nearly every big move that the state GOP has done to wrest power from Democrats — term limits, bigoted propositions, selling its soul to Trump — has spectacularly blown up in their face. Back in April, I wrote: “I’ll wager a roll of pesos that the ultimate loser will, again, be the Republican Party. The house — in this case, history — is on my side.”

The attempted Newsom coup was the worst laugher yet — because it had the best chance of the many Hail Marys that California conservatives have thrown to actually work.

The placement of the recall question on the ballot this summer was an upset in and of itself and galvanized not just conservatives but also middle-of-the-road voters and even Democrats who didn’t agree with Newsom’s COVID-19 strategy of mandated shutdowns and maskless dinners at fancy restaurants. There was enough discontent in California’s air mixed in with wildfire smoke early this summer that it looked like the recall had a fighting chance.

Californians were fatigued, and frustrated, and Newsom and the Democrats were stumbling, like a fighter who had just weathered a well-placed jab and wasn’t seeing the uppercut heading their way. This was the time when Caitlyn Jenner was the most prominent recall candidate. But the idea was that Republicans would coalesce around a sensible person like former San Diego Mayor Kevin Faulconer to expand the recall tent.

That’s when I was hearing moderate Democrats openly saying they weren’t going to support Newsom. That’s when close polls were shocking the nation and scaring Democrats into thinking there might be a historic upset.

Then Larry Elder came along, a political nothingburger that goes down best with a carafe of whine. Instead of blowing off the blowhard, Republican Party leaders stood down and let him and his supporters suck the oxygen out of the recall movement to stoke their fire-and-brimstone strategy.

Right-wingers love Elder, who basically took a page out of the Trump playbook and has a long-running knack for saying things about Black people that makes bigots swoon. Elder almost certainly scared enough people on the fence about voting to cast ballots and bail Newsom out.

Suddenly, Newsom didn’t have to defend his record so much as say he wasn’t Elder. It was the second wind El Gavin needed to roar back in a way that made rival John Cox’s Kodiak bear seem as ferocious as a church mouse.

Any sane conservative strategist should’ve seen that Elder stood no chance in California, that Trumpism might win in local races but is pretty radioactive in statewide elections.

But the adults left the GOP room long ago, and now need to regroup yet again for the future, operating a political machine with even more screws missing than ever before.

Elder told a crowd of supporters on election night in — where else? — Orange County just after the Associated Press called the death of the recall that “we recognize that we lost the battle, but we are certainly going to win the war.”

As we say in Mexico, ¿que qué? Elder will most likely ride his run to a better radio syndication deal, but his political career is deader than Monty Python’s parrot — and he took the California GOP down with him. (That is unless Trump somehow decides to make him his VP candidate for a 2024 presidential run).

Give up your win-quick schemes, California Republicans. Voters long ago tired of your embarrassing tantrums. Build to win for the long-term, not with Hail Marys thrown by quarterbacks who keep heaving it the wrong way.

Otherwise, you’re gonna end up like Tito Ortiz, left to do exhibition fights in a casino hotel in Florida — just to end up face down in the political canvas.

Options to Personal Loans When You've Got Bad Credit

Pfizer Vaccine: Data on COVID-19 vaccine for children ages 5 to 11 submitted to FDA, but aren’t seeking EUA yet

Where is most expensive rent in U.S.? Not in San Francisco, report says