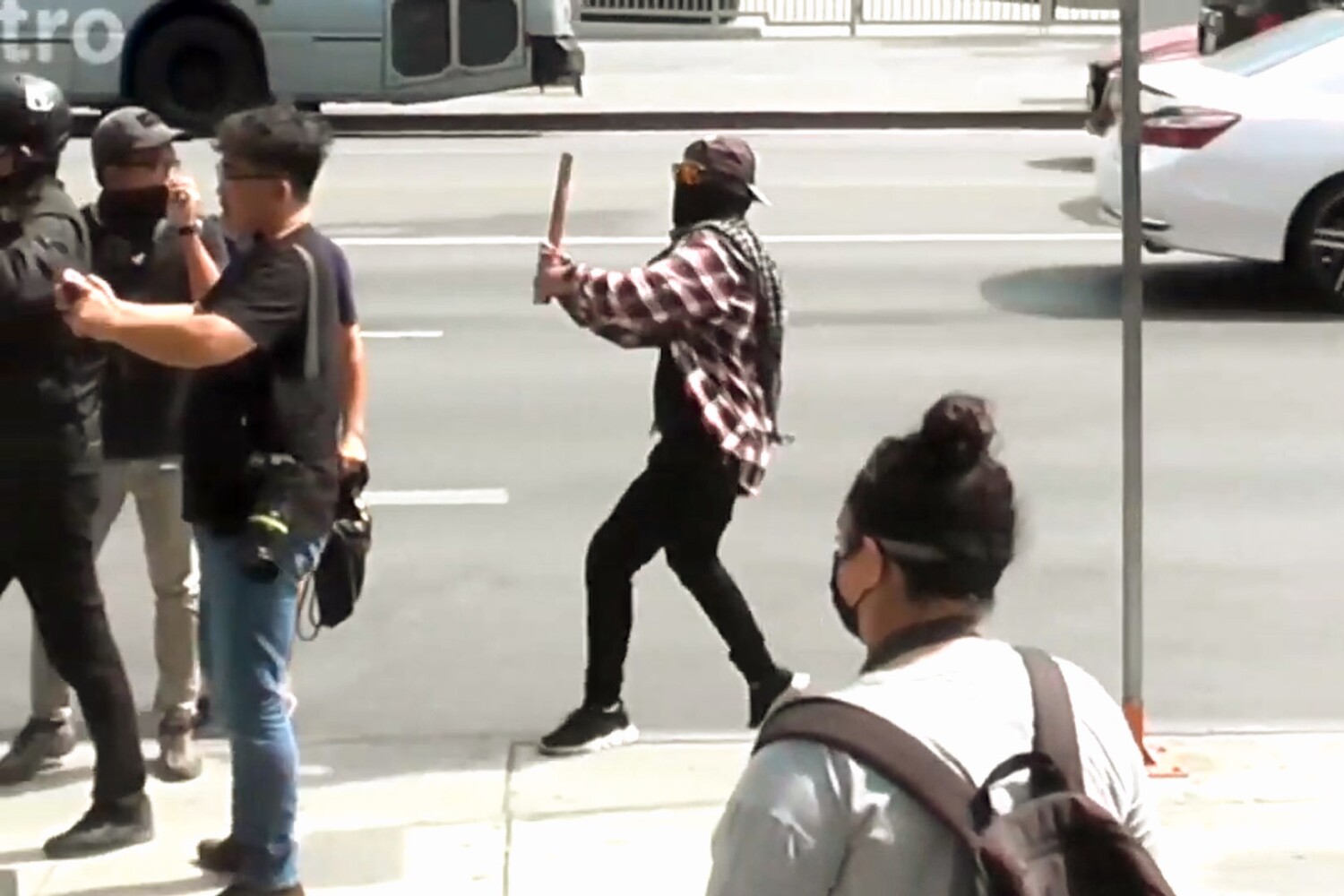 Aaron Simmons, wanted by Los Angeles police for the last week on an assault with a deadly weapon charge in an attack on a member of the media during a transgender rights protest outside an L.A. spa this summer, has been arrested.

Simmons was arrested by the LAPD on Wednesday morning in the San Fernando Valley, according to two law enforcement sources with knowledge of the situation who requested anonymity in order to speak candidly on the matter.

Simmons, 30, was charged by prosecutors last week, accused of striking independent filmmaker Rocky Romano over the head with a heavy baton-like weapon outside the Wi Spa in Westlake on July 3. Romano was wearing a helmet and had the word “PRESS” in lettering across his back.

Simmons, who could not be reached for comment, is also under scrutiny from at least two other local police agencies based on allegations that he assaulted others.

Torrance Police Sgt. Mark Ponegalek said his agency is reviewing an allegation that Simmons attacked prominent left-leaning activist Chad Loder outside the Torrance Courthouse earlier this month. Loder is known for posting information online about right-wing figures at California protests, and has repeatedly accused Simmons of committing assaults against protesters.

Ponegalek said a criminal case has not been presented in that incident to L.A. County prosecutors or the Torrance city attorney’s office.

Beverly Hills police also confirmed that they had received a report alleging Simmons was part of a group that beat up a counter-protester at a rally for former President Trump on Jan. 6 — one of several to occur in L.A. on the same day that a mob stormed the U.S. Capitol in a failed attempt to prevent Congress from certifying President Biden’s election victory.

An email sent to Beverly Hills police, which was reviewed by The Times, reported the alleged assault by Simmons and provided links to video purporting to show the assault.

Capt. Max Subin, a Beverly Hills police spokesman, urged anyone with information about the alleged incident possibly involving Simmons or any other alleged protest attacks to contact investigators, but denied the department had received video evidence of the incident. Provided with video by a Times reporter, Subin later said the video did not clearly identify any assailant, but again urged victims to contact his department.

The L.A. County district attorney’s office did not immediately respond to a request for comment on Simmons’ arrest by the LAPD, and it was not clear when Simmons would appear in court.

The LAPD launched an investigation into the assault after The Times provided officers with video captured by independent journalists. Romano has said he is happy officials have taken the case seriously.

“It seems that the only way to try to get control of the violence that’s happening out on the streets is by having some consequences,” Romano told The Times. “I just want to be able to go out there and do my job without worrying about getting hit in the back of the head.”