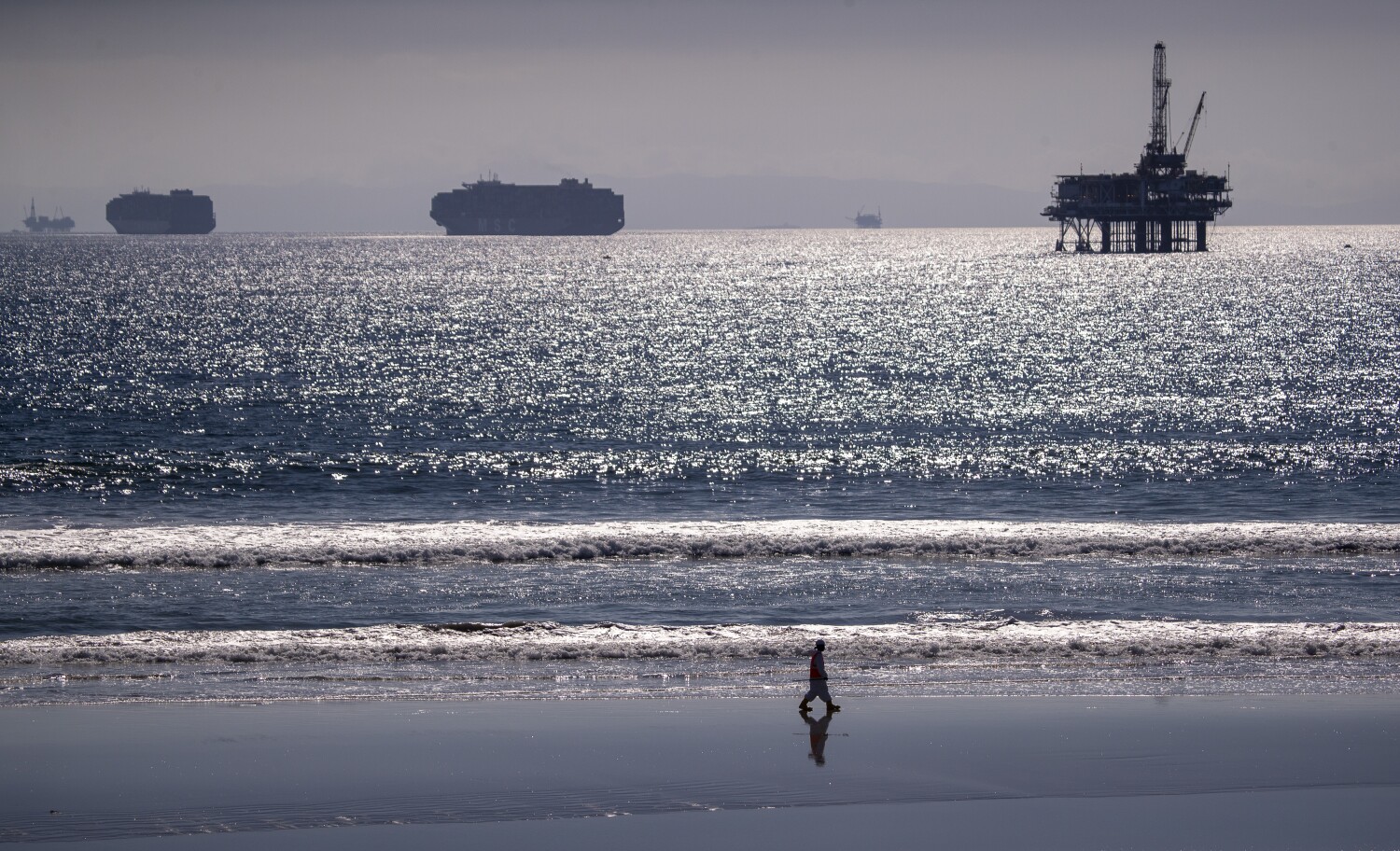 Alarmed by damage caused by a major oil spill off the Huntington Beach coast in October, an Orange County legislator on Wednesday introduced a bill to end offshore oil production from rigs in California-controlled waters by 2024, a proposal sure to face fierce opposition and potential legal challenges from the petroleum industry.

The legislation would affect 11 oil leases, all off the Orange and Ventura county coastlines. It would also allow the State Lands Commission, the agency with oversight of those contracts, to negotiate a voluntary relinquishment of the leases by oil companies before the state takes action. The cost of buying out or rescinding those leases is unclear, though the size of the industry suggests that the price tag could possibly cost the state tens if not hundreds of millions of dollars.

State Sen. Dave Min (D-Irvine) said the action is necessary to protect the California coastline from another catastrophic oil spill similar to the one in October, which caused widespread environmental damage and led to beach closures that hurt the economies of Orange County coastal communities. The oil rigs off the coast and their aging infrastructure continue to pose a serious threat to California’s coast, he said.

“It is clear to me and, I think, clear to anyone who looks at the sort of status of these rigs, that it’s a ticking time bomb,” Min said Wednesday. “You’re asking for more and more spills, and we know that this is just horrific for our coastlines, for our coastal tourism economies, for our marine ecosystems.”

Kevin Slagle, a spokesperson for the Western States Petroleum Assn., said the proposal would decrease California’s local oil supply and burden California taxpayers. Eliminating the oil leases amounts to a government “taking,” which would require those companies to be compensated, he said.

“Eliminating existing offshore production will lead to importing even more of the energy we need from foreign sources and putting California at significant risk for takings claims,” Slagle said.

The president of the State Building and Constructions Trades Council of California, a labor organization that represents oil workers and has tremendous influence in Sacramento, also expressed concerns about the potential impact of the legislation. Reducing local oil production could require the state to import more oil by tanker ships, adding more stress to California’s already crowded ports, said council President Andrew Meredith.

“There’s a constant drumbeat to cease oil and gas production in California with no corresponding responsible plan to power our state,” he said. “Nearly half of the oil coming out of the Amazon is already coming to California. Should we really be tanking more oil into California greatly increasing carbon emissions as hundreds of tankers idle in our ports waiting to offload?”

Min promised to file the legislation just after a submerged oil pipeline spilled an estimated 25,000 gallons into the ocean off Huntington Beach in October. The cause of the spill remains under investigation, but authorities believe an anchor of a container ship had dragged and damaged the pipeline.

Min’s bill would not affect the 23 oil platforms in federal waters, which are located beyond a three-mile buffer from the coast, or the pipelines that run from those facilities to the shoreline. That includes the oil platform and pipeline involved in the recent oil spill. Oil wells operating on the artificial islands off the coast of Long Beach, which are owned by the city, also would not be affected by the legislation.

Min said that his legislation would, in reality, affect only three active oil platforms off the Orange County coast that are operated by two leaseholders, the California Resources Corp. and DCOR oil companies. Neither company could be reached for comment.

If passed, the legislation would require the State Lands Commission to terminate all existing oil and gas leases in state waters by Dec. 31, 2023. Because this would be considered a government taking, since those are legal state leases granted, the state would be required to compensate the oil companies for the value of those holdings.

Those companies still would be required to pay the cost of decommissioning those rigs, including capping all wells, Min said.

Min did not provide an estimate for the state’s costs to shut down those oil operations, saying that is still being assessed, but he believes it would be could be between $25 million to $50 million per oil rig. He said that would be a manageable cost given the state’s projected $31-billion budget surplus, and an appropriate use of taxpayer dollars given the threat the offshore rigs pose to California’s $44-billion coastal economies.

During recent legislative hearings on the Orange County oil spill, Jennifer Lucchesi, executive director of the State Lands Commission, said the 11 oil and gas leases in state waters were issued between 1938 and 1968. Those leases have no end date and will continue as long as it is “economical” for the oil companies to continue production, she said.

Min and other lawmakers have expressed concern that the current operators of those offshore facilities may eventually abandon the platforms once the oil deposits are gone. If they do, and then file for bankruptcy protection, state taxpayers may have to pay the cost of removing the rigs, they said.