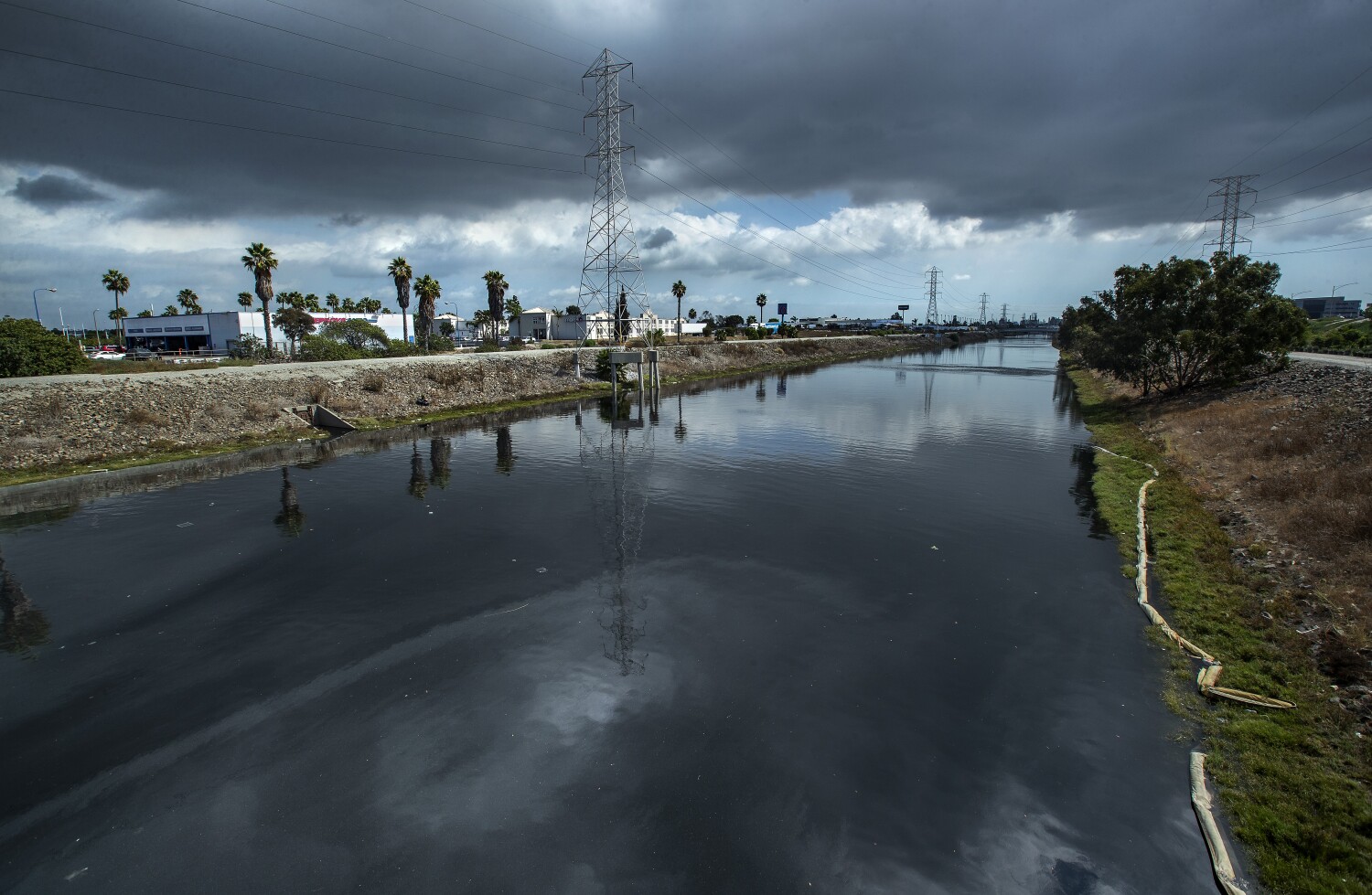 After more than two weeks of breathing noxious fumes that can cause headaches and nausea, Carson-area residents are now being advised to avoid prolonged outdoor exercise at night and in the early morning.

The amount of hydrogen sulfide gas emanating from decaying vegetation and marine life in the Dominguez Channel has exceeded state nuisance thresholds in some locations but is not considered “imminently dangerous,” Los Angeles County public health officials said Tuesday.

Still, they recommended that people avoid prolonged outdoor activities between 9 p.m. and 8 a.m. and whenever the smell, which has been likened to rotten eggs, vomit and farts, is particularly strong.

Businesses where the odor is strong should run air conditioners for several hours before workers show up, they said.

“The levels noted can cause notable discomfort, irritation, or certain asymptomatic non-sensory effects,” L.A. County public health officials said in a news release. “However, the effects are not expected to be disabling, but are expected to be transient and reversible as the exposure decreases or stops.”

Previously, officials had recommended that people close their doors and windows — even though many do not have air conditioning — and to temporarily relocate if the smell makes them too sick.

Last week, county officials announced that residents can be reimbursed for air purifiers and hotels. But it could take weeks to get the reimbursements.

Air quality monitoring stations have been set up in various locations near the channel, with monitoring efforts focused on schools and senior centers, county public health officials said Tuesday.

Levels of hydrogen sulfide were particularly high in the late evenings and early mornings in the areas next to the channel, prompting the exercise warnings for those hours.

After the stench was first reported to the South Coast Air Quality Management District on Oct. 3, it took 12 days for county crews to begin treating the flood control channel to mitigate the odor.

On Friday, workers began spraying the flood control channel with a biodegradable odor neutralizer called Epoleon that will convert the hydrogen sulfide to a salt.

The odor was expected to dissipate within five days of treatments — or the middle of this week, officials said.

On Tuesday, workers were installing equipment that will pump millions of tiny oxygen bubbles into the water in an effort to prevent additional hydrogen sulfide buildup.

But Rep. Nanette Barragán (D-San Pedro) has criticized the efforts of city and county officials as too slow and inadequate to address the needs of low-income residents, who cannot afford to wait for reimbursement.

On Monday, she asked Gov. Gavin Newsom to declare a state of emergency.

“These residents need direct aid, which is why I am asking you to declare a State of Emergency so that residents can receive direct relief and not be indebted by this event,” she wrote in a letter to Newsom.

In a normal year, storm water would have washed away more of the underwater vegetation that is now decomposing. This year, the drought caused additional buildup, officials said.

Beneath the surface, the vegetation was decaying — and the process may have been sped up by pallets and cardboard dumped upstream, which provided food for the bacteria, according to the county Public Works Department.

County agencies are investigating whether a fire at a pallet yard led to the dumping.

Fremont police respond to stabbing, shooting in one night

For nearly half of Black voters in L.A., homelessness is personal, poll finds

30% of unvaccinated say omicron has made them consider inoculations: poll

The end of HIV transmission in England is within sight, but we can’t be complacent | Deborah Gold