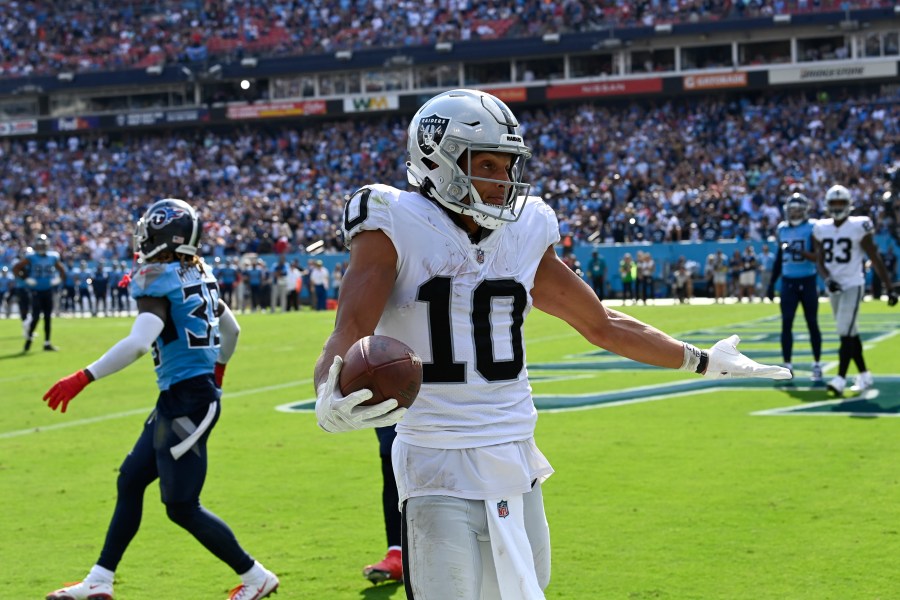 For his teammates, he’s much more than the guy who is into snakes, cleaning the environment, conditioning by running more than the length of 16 football fields, and who enjoys running to the team facility rather than driving to it.

“There’s not many people that use their legs to get anywhere anymore. Mack’s one of them,” Raiders coach Josh McDaniels said. “He’s a free spirit, but he’s got an urgency about him and an attention to detail about him that you would ask every player to possess in the building. What a breath of fresh air relative to the things he’s interested in.”

And that includes uplifting a winless team.

With the Raiders (0-3) heading into their Week 4 matchup against division rival Denver, Hollins’ eccentric personality provides a much-needed positive vibe.

“He’s got one of the most infectious personalities that I’ve been around,” fellow wideout Devante Adams said. “I don’t think I’ve been around somebody that talks so frequently, but it never gets annoying. … He’s a funny dude, great personality and he’s gonna keep you up.”

On the field, he’s been the answer to Adams’ tranquil performance the last two weeks.

After being targeted 17 times in the season opener, Adams was targeted a combined 16 times the last two games, during which quarterback Derek Carr threw to Hollins 18 times.

Hollins caught five passes for 66 yards in Week 2, and followed that performance by catching eight passes on 10 targets for 158 yards and a touchdown at Tennessee on Sunday.

Hollins’ fourth quarter heroics — including a brilliant fourth-and-goal touchdown catch over Titans defensive back Terrance Mitchell — put the Raiders in position to potentially tie the game with a little more than a minute left.

McDaniels recognized Hollins’ entire package well before the first of three roster cuts, when he called him “another offseason award winner,” lauding the vibe he brought to the facility, including the “Mack Mile,” a brutal jaunt down-and-back-and-around the practice field, roughly 1,600 yards.

“I’m not sure that there’s anything he doesn’t do,” McDaniels said. “He leads, he practices well, he encourages others, he picks guys up, he makes big plays, he’s tough, he’s in great condition. It is hard to find people that are more determined to help the team in any way they can than Mack.”

It’s the only way Mack knows how to approach anything in his life.

“Growing up that’s just how me and my brothers were raised, was no matter what you do, do it at the highest level,” said Hollins, who ranks ninth in yards per catch (17.1). “Whether I was scrubbing floors, playing football, doing banking — whatever it was, be the best I can be at it. That was always the standard for my brothers and I.”

The speedy, big-bodied veteran who turned 29 earlier this month already has a career-high 240 yards receiving in three games this season, and with two more receptions will tie his career high of 16, accomplished in 2017 with Philadelphia and 2020 with the Dolphins.

And Hollins, who is on pace for 79 receptions and 1,360 yards, isn’t just a third or fourth option during Carr’s progression of reads during plays. He’s an added deep-ball threat who can take advantage of mismatches against smaller cornerbacks on outside routes. Of the three times he has been targeted on passes of 20-plus yards, Hollins has caught two for 108 yards.

That’s all while maintaining his status as a key component on special teams.

If he had it his way, he’d play the entire game.

“I think it says a lot about the character of the human being and the type of person, type of leader he is, because he doesn’t want to come off the field for anything,” McDaniels said. “I mean, if we told him you’re running down on a kickoff team, you’re protecting on the punt, you’re the gunner on the punt team, you’re rushing punts, and then you’re gonna play every snap on offense, he wouldn’t even blink.”