Cardano claims to be one of the most advanced and diverse ecosystems in the blockchain industry. It is quite a revolutionary project introducing multiple use cases for the blockchain. That’s why its native currency, ADA, often seems lucrative to investors and the ADA price in GBP matters.

But as the token is relatively undervalued, many are hesitant to invest in the project. If you want to know its potential, here’s everything you need to know! 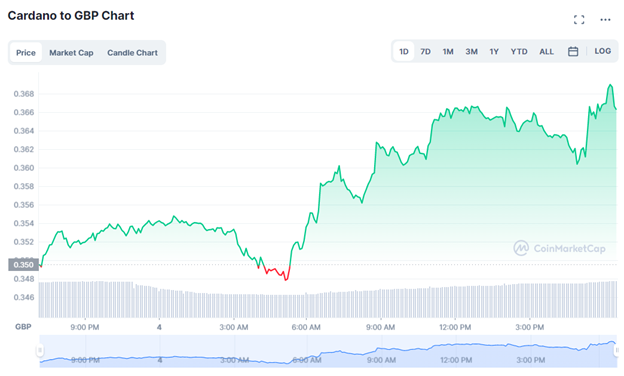 An analysis of ADA price GBP

October has been a tough month for this blockchain platform. But towards the end, it gained momentum as the price reached almost £0.37. Previously, the critical support level for ADA was at £0.34, and the key resistance level was £0.37. Now, its value has moved above this resistance, which hints toward a possible bullish trend.

The currency’s value has risen by around 5% in the past seven days. Now, it seems to be in the position of going past this level and capitalising on the upward trend. If it manages to sustain its current value, it may see an upswing that will take it to the 0.45 GBP mark.

Cardano has experienced a price correction and is showing signs of a bullish position. But its performance is not as impressive as Dogecoin. Recently, it has overtaken Cardano as the eighth-largest crypto in terms of market cap. Moreover, DOGE has surged over 46% in the past seven days.

As of today, DOGE’s value has reached £0.1131. It also briefly touched the £0.13 mark, which was the highest in the past six months. However, Dogecoin is currently down by 2.50%. Nonetheless, these gains are massive in comparison to Cardano. This is the reason DOGE has surpassed ADA in the rankings.

Price patterns in the past of ADA

ADA’s price history suggests that it performs well only during the bull cycles and struggles badly during the bear cycles. When it was launched in 2017, its value was only around £0.020, reaching £0.98 at the end of the year. In 2018’s bear market, it plunged to £0.11.

From 2018 to 2020, Cardano’s value remained between £0.03 to £0.07. Then, in the bullish market of 2021, it reached its highest value of £2. After that, the value continued to drop. This indicates the highly volatile nature of ADA. That’s why long-term investments in Cardano have always been a bet.