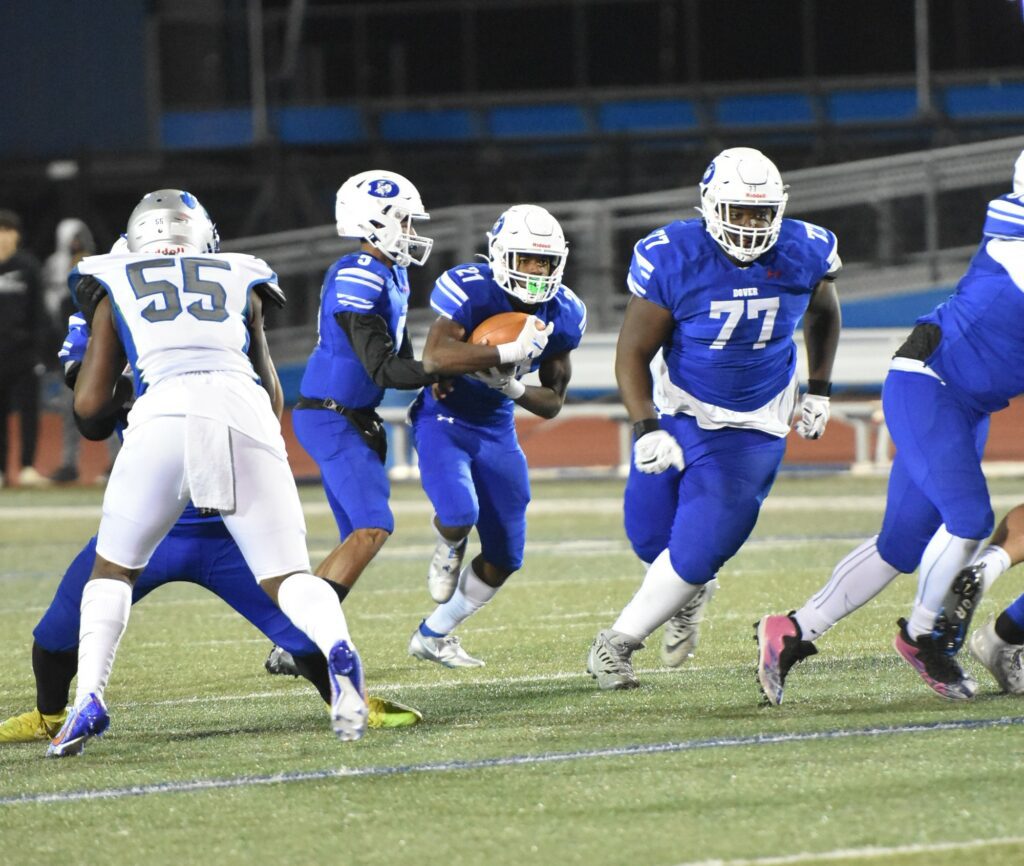 Dover Football lineman Jason Hoskins out in front to block as quartbck Nahseem Cosme hands the ball off to running back Jakwon Kilby, photo by Ben Fulton

Dover – The players on the Dover Senators football team were not even born the last time the Senators played in the state championship game in 2001.

Most of their parents are too young to remember the last time Dover won a state title in 1988, but they are all aware now that the Senators are headed to Delaware Stadium in two weeks to play for a Class AAA state championship versus the Smyrna Eagles.

“We are real excited and real proud of what our guys have done and where they have come from. They have put a lot of hard work in and it’s a great story of their hard work paying off,” Dover head coach Chip Knapp said.

John Parker and Tyron Abrams each scored three touchdowns for Dover as the Senators pulled away from St. Georges in the third quarter for a 48-14 win at home.

Dover scored on their first possession when Parker took a Nahseem Cosme pass 30 yards for touchdown. Brandon Yoder added the point after kick as the Senators jumped out to a 7-0 lead. Yoder was perfect on point after tries converting all seven kicks.

St. Georges answered in the second quarter when Donovan Brooks hooked up with Jayson Askins-Brooks on a fourth and 12. Brooks caught the ball in the middle of the field and then made a move on the Dover defenders reaching the endzone for a 24 yard touchdown pass play. Joshua Freeman converted the first of his two point after kicks as the Hawks tied the game 7-7 with 8:45 to play in the first half.

Abrams answered for the Senators just 30 seconds later on a 32 yard touchdown run followed by Parker’s second touchdown of the game, a two yard run with 2:57 to play in the first half giving Dover a 21-7 lead at halftime.

“Tyron was an explosive player last year and he is again this year, you would have heard about him earlier in the season except he was playing with a broken thumb in a cast so we wanted to hold off on his carries until now,” Knapp said.

The Hawks successfully executed an onside kick to start the second half. On second down Jaylen Powell sacked Brooks and then recovered the fumble. After the two teams traded punts, Cosme and Parker connected again, this time for a 51 yard pass for a touchdown as the Senators extended their lead to 28-7 midway through the third quarter.

The Hawks answered on their next possession when Brooks and Thomier White scored on a 51 yard pass play of their own, cutting the score to 28-14.

“This is a special moment, a great moment to be here with my team and go to the state championship,” Abrams said.

Dover amassed 395 yards of total offense with 269 of those yards coming via the rushing game. Jakwon Kilbly led all rushers carrying the ball 16 times for 116 yards while Abrams rushed for 78 yards on five carries and had 25 receiving yards with three touchdowns.

Parker had 19 yards rushing and 99 yards receiving for Dover and three touchdowns. Cosme completed 7 of 13 passes for 126 yards and threw three touchdown passes.

Brooks was impressive for the Hawks in a losing cause completing 14 of 27 passes for 160 yards and a pair of touchdowns he also had 22 carries for 49 yards.

Dover and Smyrna played once this season on October 22 with the Eagles winning 46-21.

The Class AAA game is scheduled to kickoff at 3:30 at the University of Delaware.