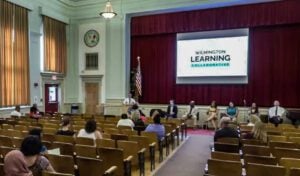 Cathy Thompson, the former head of the board, asked Superintendent Dorrell Green to ensure that the newly-created board is as transparent as possible during their Nov. 16 meeting.

The Learning Collaborative’s memorandum of understanding was signed Nov. 1 by members of the boards of Red Clay, Brandywine and Christina school districts.

On Nov. 16, Thompson pointed out, the new public group indicated it will comply with the Freedom of Information Act, which requires posted meeting notices and for citizens to be able to access unreleased or uncirculated documents upon request.

“I’d like to know when their meetings are and where they’re going to advertise the meetings, because that’s going to be very important for community engagement and for everybody’s engagement,” Thompson said, “because right now… it’s hard to know how they’re operating.”

Green said that concern should be on hold until the collaborative’s governing council is formed, which the existing members of it are in the process of doing.

Efforts were unsuccessful to reach Thompson or Green for comment.

The 20-page agreement says each district superintendent and city school board member to be on the council.

The five council positions that need to be filled are a parent representative from a Learning Collab school, a retired city educator, an appointee from Wilmington Mayor Mike Purzycki and a high-school senior in the city to represent students.

RELATED STORY: Here’s what the Learning Collab will do to get started

“The actual council itself will be required to follow FOIA and open-meeting laws,” Green said.

Thompson asked if Green could bring up her concerns about public meeting notices to Learning Collaborative officials, which he said he would.

“Once the WLC Council is formed in January, meetings will be scheduled and follow public meeting laws,” said Alison May, public information officer at the Department of Education.

In the meeting, Green said he wasn’t sure if the meeting notices and materials would be only on the Learning Collaborative’s website or if they would also be published on the websites of the three districts who make up the collaborative: Red Clay, Christina and Brandywine.

Green said there is a possibility meeting notices could be posted to multiple websites, including the districts’.

After the council is formed in January, Green told Thompson he’ll make sure it’s a clear process of informing the public when meetings are and pushing out all other information regarding the collaborative.

Thompson also asked if the job description for the executive director of the Learning Collab  would be posted.

Green said it will be once collaborative officials and the Department of Education iron out exactly what the position will entail.

“We anticipate that the WLC Council will want the job posted on Join Delaware Schools and other platforms that will attract the strongest pool of candidates possible,” May said.

There have been internal discussions over the qualifications of the executive director, Green said, and if that person needs to have experience in education, or if a broader background in fields like project or change management would be more appropriate.

He added that any information about a job description would be shared with Red Clay’s board before being published.

Thompson thanked him, saying, “The more information, we can get the better.”

Raised in Doylestown, Pennsylvania, Jarek earned a B.A. in journalism and a B.A. in political science from Temple University in 2021. After running CNN’s Michael Smerconish’s YouTube channel, Jarek became a reporter for the Bucks County Herald before joining Delaware LIVE News.

Jarek can be reached by email at [email protected] or by phone at (215) 450-9982. Follow him on Twitter @jarekrutz and on LinkedIn