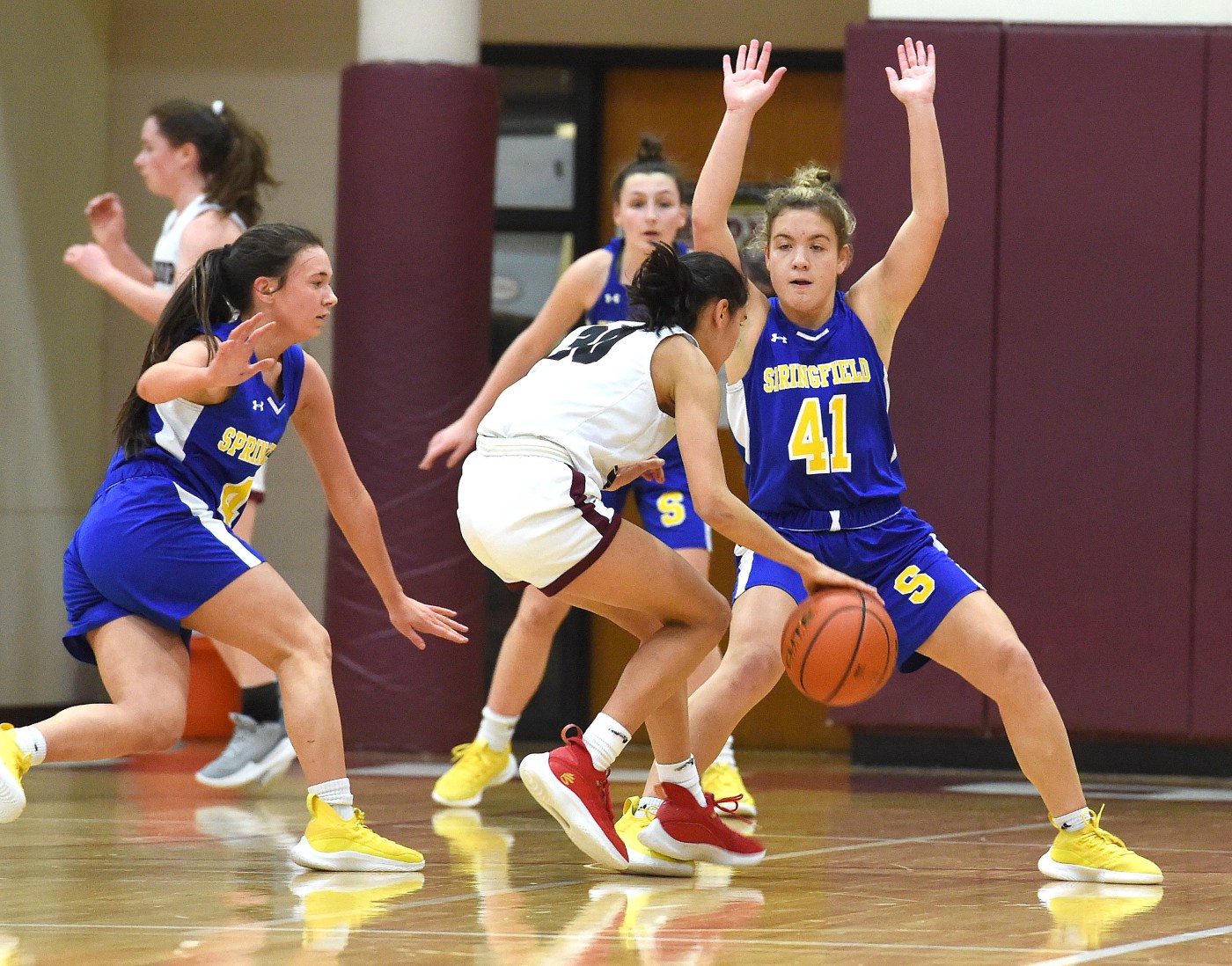 RADNOR — Mary Sareen was fouled on her way to the basket with less than 90 seconds to go in the fourth quarter Tuesday.

The junior made the shot and the free throw. The home crowd came alive. Sareen and her Radnor teammates started to believe they could pull this off. Springfield had led by as many as seven points in the fourth quarter, but suddenly Radnor trailed by a point.

This wasn’t just another regular season game for the Raptors. There was a lot of incentive that would come with winning it.

During the school day the team found out that senior forward Ellie Davis, one of the top bigs in the Central League, would not be available due to illness. If Radnor could beat first-place Springfield and Conestoga lost to Garnet Valley, the Raptors would get the sixth and final seed in the Central League tournament, which begins Thursday night.

Radnor went to a full-court press down a point and Springfield was whistled for a five-second violation on the inbounds pass. The Raptors made the Cougars pay.

On the Raptors’ next possession, Springfield point guard Mia Valerio forced Sareen to go baseline with her dribble. Sareen was able to get past Valerio and float a shot just out of the reach of forward Anabel Kreydt for a one-point lead. Springfield would have two more looks but shots were off the mark, leaving Sareen and the Raptors as 31-30 winners.

That’s when the questions came: “Do you know if Conestoga lost?”

Indeed, Garnet Valley did the honors with a 61-35 victory over the Pioneers, boosting Radnor into the Central League playoffs. The Raptors will travel to Marple Newtown Thursday for a first-round game.

“Everyone stepped up tonight,” said senior Ava Gummel, who had six points. “We even pulled JV players off the bench and they played great.”

Sareen was clutch down the stretch. She had seven of her team-high 12 points in the fourth quarter, including three foul shots. She also came up with a big steal in the final two minutes. Her game-winning basket, and how that play unfolded, surprised her to some extent.

“(Valerio) the whole game was forcing me inside, not baseline,” Sareen said. “The one time she forced me baseline, I don’t think that No. 42 (Kreydt) was ready for that and I was able to make the shot.”

Radnor (12-7) may also have clinched a top-six berth in the District 1 Class 5A tournament. After starting the season 4-5, the Raptors have gone 8-2 in their last 10 games.

“We had everyone show up and there was a good energy in the gym,” Gummel said.

Gummel ended a lengthy field goal drought with a basket from the wing in the fourth quarter, trimming Springfield’s lead to 26-21. On Radnor’s next possession, Maddie Bader drilled a 3-pointer to make it a two-point game.

“This was a team win,” Sareen said. “Everyone helped out and did what they needed to do.”

First-year Radnor coach Rob Baxter has been pleased with his squad’s development. Without Davis, the Raptors were at a disadvantage, but still found a way to grind out a tough win against the reigning Central League champions.

“They were all texting me today and said they were all watching film this afternoon. They were trying to figure out what they were going to do without Ellie,” Baxter said. “All year they’ve kind of stepped up. We had JV girls come in, like Megan Bole (two points, one assist, one steal), who really stepped up and made big plays for us tonight.”

Springfield shot 5-for-12 from the field in the first quarter, then struggled to make shots the rest of the way (5-for-23). Turnovers and missed foul shots in the fourth quarter proved costly. Even still, Anabel Kreydt scored a game-high 13 points and grabbed 13 rebounds. Kaitlyn Kearney added 10 points and two steals. The Cougars will be the No. 2 seed in the league playoffs.

“Credit to Radnor because they did a great job tonight,” coach Ky McNichol said. “We made too many mistakes down the stretch to win the basketball game.”

In other Central League action:

With the win and Springfield’s loss, the Fords earned the No. 1 seed in the league playoffs. They will play Saturday in the semifinal round.

Harriton 50, Strath Haven 39 >> Annie Aspesi scored her 1,000th career point as the Rams closed out the regular season with their seventh straight win over a Central League opponent. Aspesi finished with a game-high 21 points.