When it comes to dating, the pressure is firmly on. It only takes a tenth of a second to form an impression of a stranger, according to Princeton researchers. And that’s before you’ve even opened your mouth.

Once a first impression is made, all you have left are your conversational skills. And this is the hard part. But Harvard researchers have found that the best way to make a good impression is by simply asking a question.

Once you’ve decided what to wear for a first date, one of the difficulties is knowing how serious to get with conversation, or how light to keep things. You don’t want your date to start crying into their spaghetti after opening up about their darkest childhood secrets, but science has given us good reason to delve a little deeper than small talk if you really want to make a lasting impression.

In 1997, an academic paper gave the world 36 questions it promised that would make a person ‘fall in love with anyone’ when asked on a date. In 2015, a New York Times article about the study and the questions – many of which were quite intimate and personal – went viral. The whole idea behind the questions was to create closeness between two people, and for the participants to ‘enjoy getting close’ to each other. A shortcut to romance and intimacy, in other words.

So here are some questions that will really help you get to know someone, whether it’s light-hearted banter on a first date or deep, meaningful conversations about life with your spouse. The chances are, you met your potential mate on some app or other. The aim here in the virtual world is to keep the conversation light and flowing – and glean an idea of where to take your date. You want to build excitement and anticipation, not give anyone cold feet.

If possible, come up with some topics of conversation to expand on later in the week when the date rolls around. You’re not going to make anyone fall in love with you here, so leave your 36 questions at the door and keep things relatively simple.

– What’s your favourite place to spend an evening out?

– What’s your go-to drink on a night out?

– If you could hop on a plane right now, where would you go?

– If you could be any person for a day, who would you be and why?

– Are you a dog or cat person?

– Where do you live?

– What’s the best meal you’ve ever had?

– Is there somewhere else in the world you’d like to live? The first half an hour of a date is all about loosening up, breaking any tension and just … getting … through it. It’s important to keep things lighthearted, the conversation natural and quite general so you can gauge each other’s personality before moving things on to anything more groundbreaking.

The Harvard researchers discovered that those who ask more follow-up questions during a conversation instantly become more likeable, so if your date responds positively to your initial questions, why not hit back with another related question to allow them to expand? It shows you care about what they are saying and are interested in hearing more. In the meantime, try these as starting points.

– What’s the worst pick-up line you’ve had on the app?

– What do you have lined up on Netflix?

– Where did you grow up, and how long have you been living here?

– Where did you go to school?

– Have you been on any holidays lately? Any trips coming up?

– Do you have any siblings?

– Was there a job you always wanted to do as a kid?

After A Few Drinks 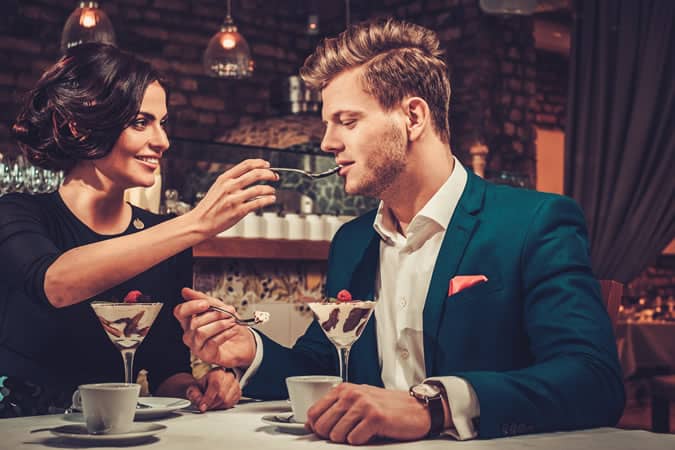 At this point in the date, you’re both loosening up and starting (hopefully) to feel comfortable around each other. You want to open the conversation up to a few anecdotes, and get into some more meaty conversations so you can get to know each other now the nerves are starting to settle.

Your first impressions will well and truly have been made by this point according to the Princeton study, but you can improve your stock by continuing to be interested in what your date has to say.

– What one thing do you wish you had invented?

– What was the last great film you watched?

– If you weren’t in your current job, what would you be doing?

– What are you better at than 90 percent of the population?

– What advice do you tell other people but are rubbish at doing yourself?

– What’s the worst date you’ve ever been on?

– If you had to eat one cuisine for the rest of your life, what would it be?

– Do you prefer swimming in the sea or the pool?

– If you could have one superpower, what would it be?

When You’re Relaxed In Each Other’s Company You’ll both have a pretty good idea if sparks are flying by this point, so all you can do from here is have a good time and make it a memorable evening. It’s time to ramp the conversation up a bit before last orders.

– What one thing are you most grateful for in life?

– What’s the most spontaneous thing you’ve ever done?

– How close are you to your family?

– If you could tell your younger self one piece of advice, what would it be?

– What’s your favorite part of your home town?

– And what do you hate most about it?

– Who’s the most interesting person you know?

– What would you do with your free time if you didn’t need to work?

– Have you ever had a fist fight? All good dates come to an end, unfortunately – and this is the time when you need to leave on a good impression. It’s all about getting a balance between not wrapping it up too abruptly, and not letting the goodbye linger so long it gets awkward. You don’t need to overcomplicate it, just be natural – you’ve done the hard work already.

– Do you have any exciting plans over the weekend?

– How are you getting home?

– What did you think of this place?

– Where shall we go? If the first date went well enough, the second date will creep up on you before you’ve even recovered from the nerves (and hangover) of the first. In fact, in a survey of 1,000 couples by dating app Coffee Meets Bagel, 77 percent of people organized their second date while on their first date or the day after. So don’t hang around.

It’s important to keep the momentum going and the conversation flowing, too, so there’s a third. Here are a few ideas of what to ask, to pick back up where you left off.

– How was your week?

– What’s been the best thing to happen to you since we last saw each other?

– Have you read anything interesting this week?

– If you could go anywhere in the world on a date, where would it be?

– What is one misconception people often have about you?

– If you could change one aspect about yourself, what would it be?

– What annoys you most about dating?

– If you could only keep one possession of yours, what would it be?

– Do you spend your money on anything you shouldn’t?

When Things Start To Get Serious 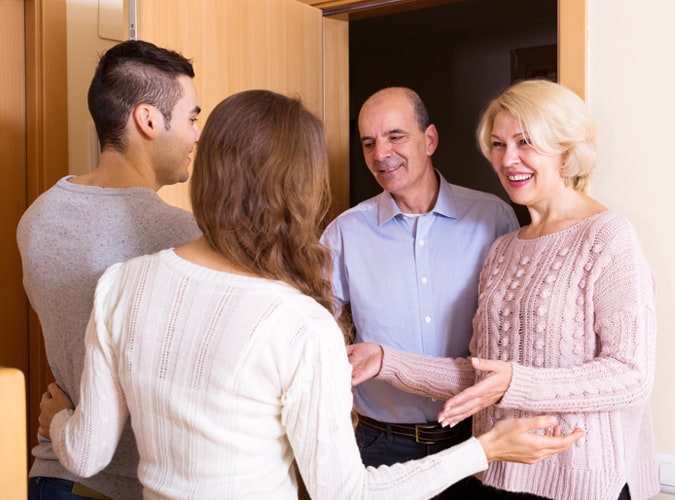 Okay, we are skipping a few dates here. But what happens when you and your date start to go beyond the dating phase, and actually enter a full-blown relationship? Are there specific questions you still need to ask? Well, by now you should no each other fairly well, but there are still improvements to be made. Perhaps you haven’t yet met the family or been introduced to the parents; maybe you need to brush up on friendship groups and who’s who as you really become part of each other’s lives.

– Which parent are/were you closer to?

– Which family member would you go to in a time of need?

– Were you ever tempted to follow in your mother or father’s career footsteps?

– What’s the most embarrassing thing your parents have ever said to you?

– Would you change anything about your relationship with your family?

– Who’s your most treasured memory with your best friend?

– Have you ever massively fallen out with a close friend and why?

– What’s the worst thing a friend has ever done to make you upset? 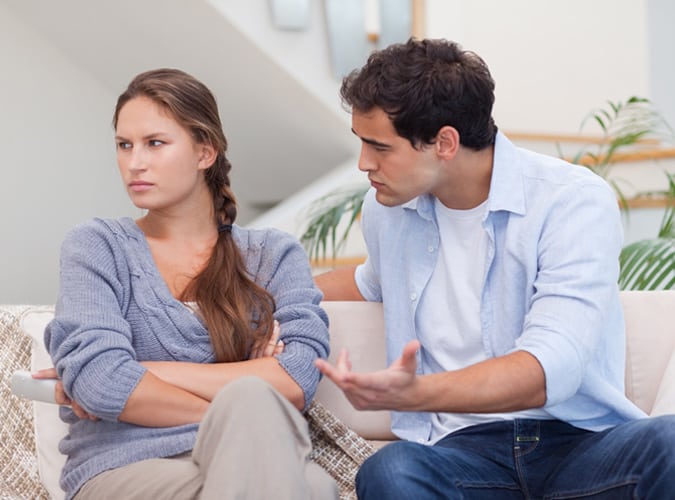 The all-dreaded, all-damning, all-too-common reality of long-term relationships: arguments. They’re a fact of life and, in reality, if you do them right, they’re actually healthy for your relationship.

In a study, the Institute for Social Research at the University of Michigan found that people who argued regularly were (ironically) actually less stressed out during their day – supposedly because they released their tension gradually rather than letting it build up into a bigger problem. But what questions should be asked in order to address it?

– How does it make you feel when we argue?

– Do you want your own space for a minute?

– What do you think it is that makes us argue?

– How can we avoid it next time?

– What do you need me to do differently?

– Is there anything you’re bottling up?

– What shall we do together tomorrow? 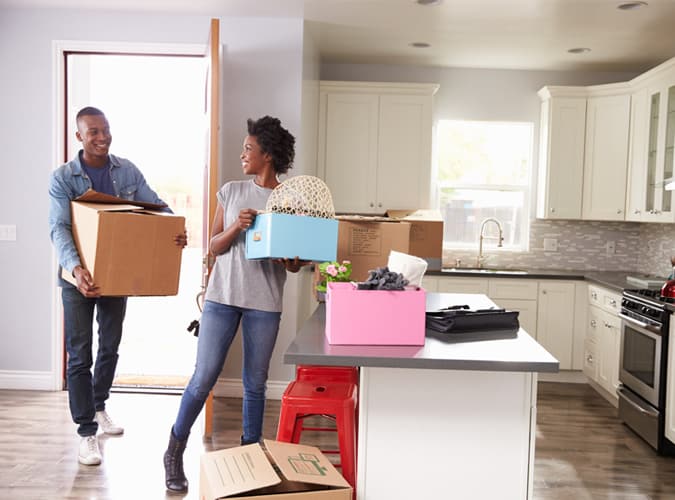 Provided you made it past the above section (and the argument), you may find yourself moving in together with your partner. A small step this is not, and it’s one that will likely raise many questions in the build up to it happening and beyond.

This is a big test of the relationship, which will either make it or break it – you can’t exactly move out, live separately and stay together as if nothing ever happened. Now is the time to address not just the practical questions about moving in, but also whether you see the same future together. There are some biggies here.

– Do you think we’d argue more being in the same space all the time?

– Do you want to be close to your family?

– If there was one compromise for your living situation, what would that be?

– What’s your dream piece of furniture?

– Are you ready for jointly-owned cutlery, tea towels and furniture?

– Where do you see us living in the future? 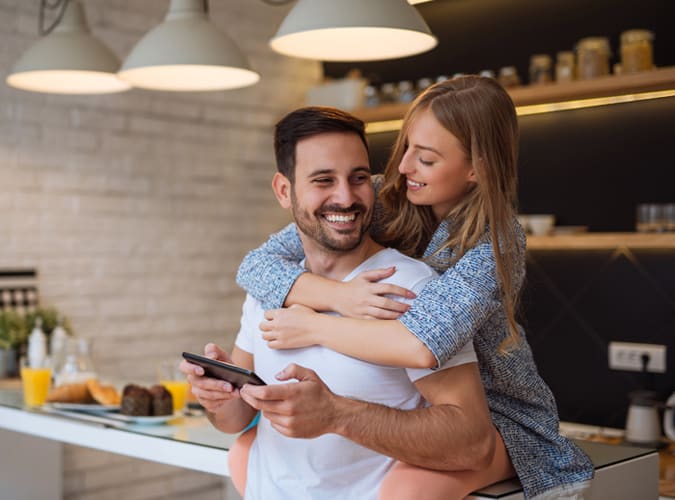 Congratulations, you’ve made it through the dating assault course and relationship minefield, and you’re in it for the long game. Yes, you are settling down but that doesn’t mean you have to take your foot off the gas – it’s important to keep things interesting and continue to push and inspire your partner, and vice versa.

That doesn’t mean waking them up every morning while reciting a new Chaucer verse; rather, go out now and again (remember those early days) and keep challenging each other and asking interesting questions. It will keep you on your toes, which is a good thing.

– If you could re-do one year of your life, which would it be and why?

– If you were to die tonight, what would be the one thing you would tell me?

– Do you have one secret you’ve never shared with anyone?

– Am I doing enough?

– Have you ever thought about sleeping with anyone else? Gosling doesn’t count.

– What should our next big holiday be?

– Is there something you’d love to do, but feel like we can’t?

– Have you ever not done something that you wished you had, and still can do?

– What’s the happiest you’ve ever been?

– What big plan shall we make for the next five years?