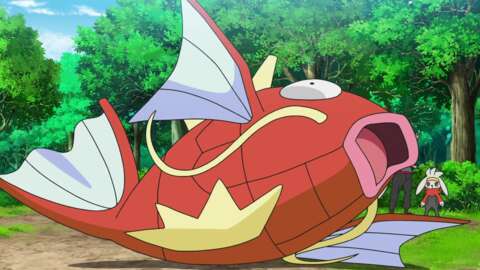 YouTube streamer Mutekimaru Channel was forced to take care of some seriously fishy business last week when his streaming partners–a tank full of minnows–decided to use his credit card to make a few purchases while playing Pokemon Scarlet and Violet. Yes, you read that correctly.

The “fishing scam” was first reported by SoraNews24, who explained how the whole ordeal took place. You see, over the past few years, the streamer behind Mutekimaru Channel has made a name for themselves with their fish-controlled streams. The streams work thanks to a rig Mutekimaru Channel developed that monitors where the fish are swimming and assigns each section of the tank with a corresponding button. So, as the fish swim, they also “play” the game.

During a recent Pokemon stream, however, things got out of hand when the game suddenly crashed while the streamer was out of the house, leaving the scheming sea-farers with complete access to his Switch. Though only one fish is generally permitted to be on stream at a time, it didn’t take long for a few friends swim over to the play area and join the aquatic Pokemon enthusiast to engage in some light, accidental credit card fraud.

The fish quickly made their way to the Nintendo eShop app where they redeemed a few rewards Mutekimaru had yet to claim, purchased a Nintendo Switch Sports cosmetic, downloaded the Switch’s Nintendo 64 emulator, and read far more user license agreements than most of us have in our entire lifetime. Shortly after, the fish decided to call it a day and powered the console off.

According to Mutekimaru, they first knew something was wrong when they began to receive emails from Nintendo thanking them for their purchases. Mutekimaru was shocked to discover the fish–along with a little help from Pokemon Scarlet and Violet’s numerous, game-crashing bugs–were behind the security breach. Despite the brief panic (and the window of time where their credit card number was shown on stream), Mutekimaru said they found the incident incredibly humorous. The streamer later took to YouTube to upload a video of the incident complete with funny captions, a look at the emails he received, and the very strange refund claim he filed.

Be sure to watch these events unfold in the video below and remember to always be present when allowing your fish to stream.