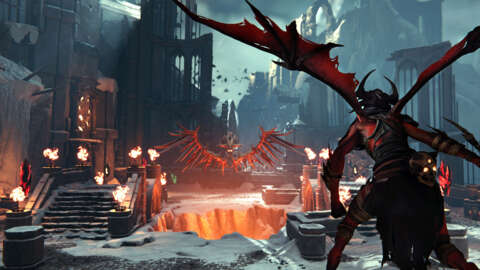 Developer The Outsiders has announced that Metal: Hellsinger, its most recent game, has reached 1 million players and will also be coming to the PlayStation 4 and Xbox One. In addition, there’ll also be a new update that introduces a new difficulty, weapon skins, combos to learn, and more.

Archdevil is the fourth-highest difficulty now. Those who play on this mode will go against stronger demons and have no last stand to rely on. A new Elite Seraph demon has been added to the game, as well as new combos to learn. Now when players perform certain actions with specific beats, such as killing an enemy, soaring, and then killing another, they will earn additional fury and a higher score.

New Coats of Arms Collectibles have been added to each map. Players can find one hidden Coat of Arms on each difficulty, including the newly added Archdevil. When players find them, they’ll unlock new weapon skins at specific thresholds and be able to complete the whole set. The latest update also introduces quality-of-life improvements such as balancing and performance optimization.

Lastly, due to the positive feedback Metal: Hellsinger has received late, all players can receive a free digital artbook that’s available now in-game.

For more GameSpot news, check out these stories: