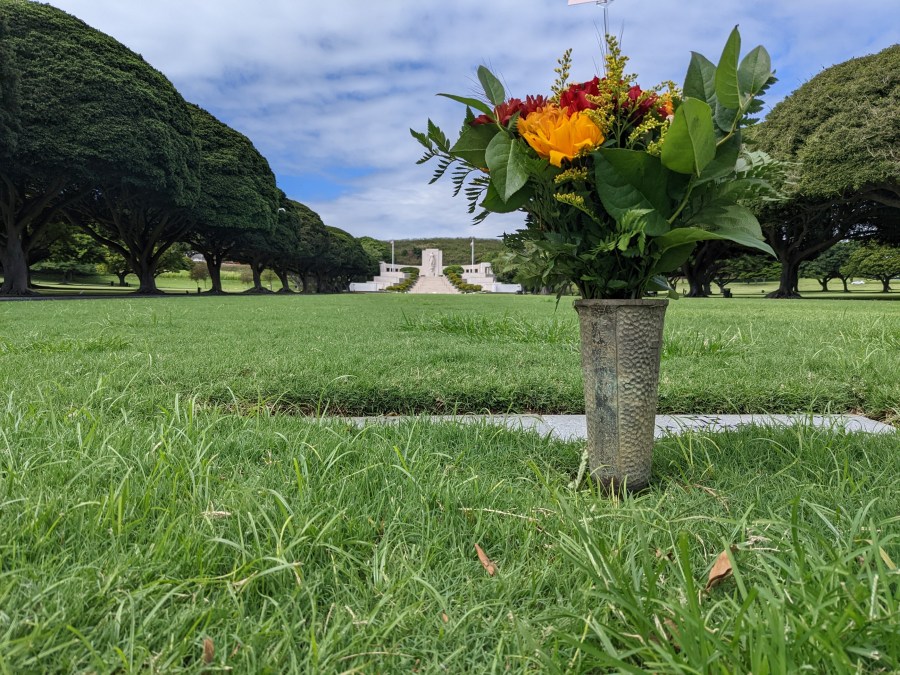 HONOLULU (KHON2) — Many will be giving thanks to military members and veterans for their service to the country, some will be paying their respects by placing flowers for those who are no longer with us.

But a military family sharing their disappointment over copper flower cases on two family graves that were apparently taken at the National Memorial Cemetery of the Pacific.

Check out more news from around Hawaii

Jan Keka was born and raised in Hawaii and now lives in California. She said she visits her father’s, William Keka Jr.’s, gravesite at Punchbowl every time she returns to Oahu. She has several family members resting at the cemetery.

But on her recent visits, she was surprised to see two copper flower vases missing from her family’s sites.

“If it is being taken or stolen, you know, that’s to me so disrespectful,” Keka said. “Because, you know, they fought for our country.”

Keka said over the decades, this had never been an issue. She called the cemetery’s office to ask what could be done about it.

Keka said, “When my father-in-law’s (vase) was missing, he did call me back on that Friday afternoon and said, Oh, they double-checked, and they couldn’t locate the vase.”

The Punchbowl National Memorial Cemetery of the Pacific Director James Horton said he shares the frustration of families whenever they call to report missing vases. He said staff will out and search the area, but it could be difficult since not all vases have gravesite numbers or names engraved.

“If it does not then it is very difficult for us to figure out whose vase is whose, but after that, if we can’t find it then we within five days will get back in touch with the family,” Horton said. “We’ll let them know what the results were either we found it we put it back or we were not able to locate it.”

Horton said there is one 24/7 security patrolling the entire grounds, and it is challenging to know if vases are simply misplaced, moved or are being taken for their value.

A policy change from the United States Department of Veterans Affairs could eventually end this headache for families. Metal flower vases are no longer being installed or replaced, instead, the public is encouraged to use plastic temporary flower vases.

Keka hopes other families will not have to experience this problem, but shares on message.

More information on the Punchbowl cemetery’s flower policy can be found, here.

Get Hawaii’s latest morning news delivered to your inbox, sign up for News 2 You