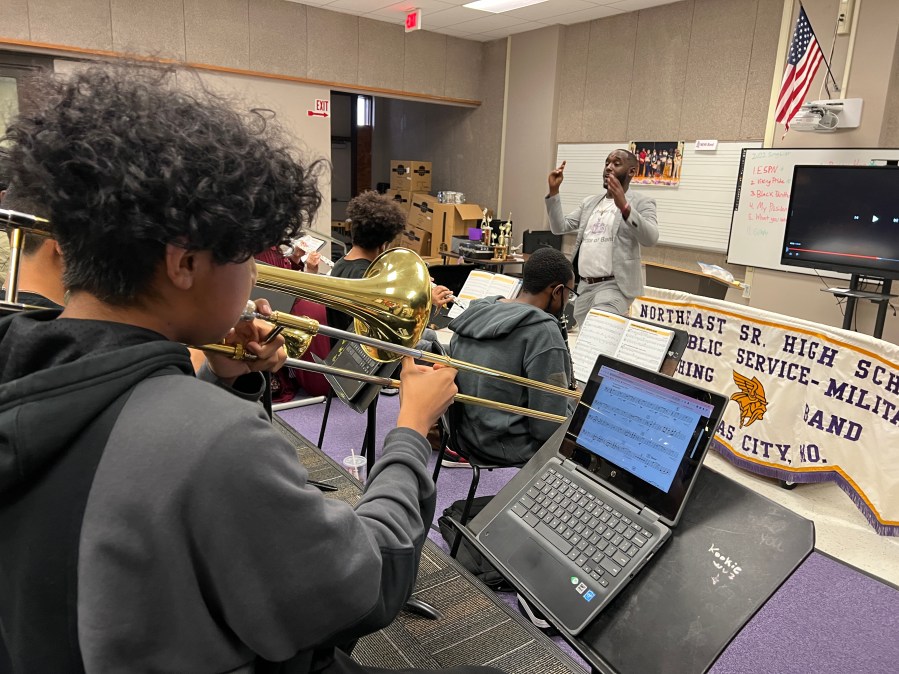 KANSAS CITY, Mo. — This school year, a long effort to increase education around the arts in Kansas City Public Schools is hitting its stride.

New funding over the last two school years is part of the reason why Northeast High School has a band after roughly a decade without a band program.

He came to the newly-created position before last school year, with new instruments thanks to funding through the district, but no students.

“It was tough because here I am, new, trying to start a band program and they’re like, ‘What is band,” Maltbia said.

His band of 25 is sometimes smaller during their 3-4 practices a week because the students are involved in other activities. Pictures around the room work as Maltbia’s own resume, showing his time in the band at Alcorn State University.

“It helps a lot because most of the kids don’t know that’s me,” Maltbia said. “So when I tell them, they’re like, ‘That’s you? So that’s a big part of my recruiting process, just letting the kids know that they can get to college through music and academics.”

So far it’s working for students like sophomore Adrian Walker, the band’s drum major, who thought he’d focus on sports in high school until he found band.

“It feels like harmony to be honest,” Walker said. “All the instruments playing together, it sounds pretty cool.”

Brisa Lorenzo Narvaez was right there with him.

“When we first began, there were barely any students joining,” said Lorenzo Narvaez.

The start up band has given all the students a chance to expand their horizons musically, but trips like the one they take Friday expand it in other ways. Maltbia is taking the group to William Jewell College’s Music Department to see the campus and learn about what it would take to play in college.

“It’s just all about exposure,” Maltbia said. “For a lot of the kids, this will be their first time ever stepping foot on to a college campus…I want them to leave tomorrow knowing that, ‘I can do this. It’s available to me. I may not choose to do this but the opporutniy is there for me.”