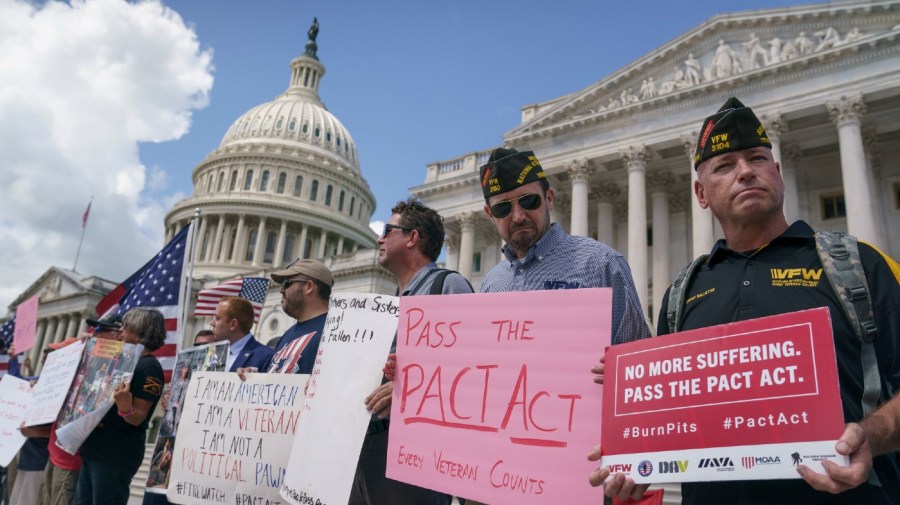 WICHITA, Kan. (KSNW) — The Promise to Address Comprehensive Toxics (PACT) Act would expand health care and disability benefits for 3.5 million veterans if signed into law by President Biden. Specifically, it would help those battling illnesses believed to be linked to toxic burn pit exposure.

Marine Corps veteran Eric Johnson served eight years. Deploying twice to Iraq and once to Afghanistan. He says burn pits were the norm.

“I’ve been in burn pits throwing trash in there,” said Johnson. “They just dig a hole in the middle of the sand, and you throw every single thing that you don’t want in there. I mean, there was there sometimes it was a dangerous place to be there’d be batteries blowing up and ammo blown up in there and so, you know, human waste and all kinds of other stuff they throw in there so that all that stuff is right there and your base and all that smoke is just built on right there into where your living areas are.”

Johnson has since suffered a sinus condition, but he says he is one of the lucky vets that have all health care fully covered by Veterans Affairs (VA). He says many veterans are not covered, and getting care can be an uphill battle.

“If you don’t have something in your medical files from when you were in, and to my understanding, I don’t know if this 100%, But if you don’t get a claim in the first 10 years, you don’t have a very good chance of getting a claim,” added Johnson.

The PACT Act would change that by extending eligibility for care to veterans of the Vietnam, Gulf War and post 9/11 eras who’ve been subject to toxic exposure.

“They’re going to be able to tie that event directly. They’re not going to have to fight the VA on it. So I think that’s great for veterans,” concluded Johnson.

President Biden is expected to sign the bill into law in the coming week.