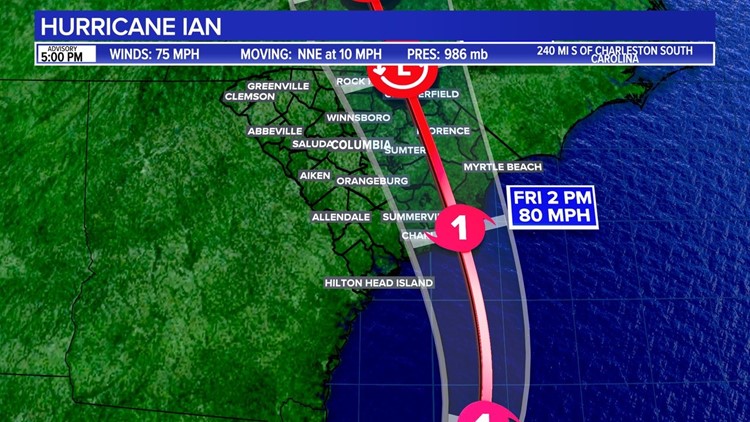 Ian is expected to move up to South Carolina, bringing with it heavy rain and strong winds.

COLUMBIA, S.C. — Ian is now a Category 1 hurricane again as it moves toward the South Carolina coast, where it will come ashore Friday, bringing with it storm surge on the coast and heavy rainfall and strong winds in other parts of the state.

As of the 8 p.m. advisory from the National Hurricane Center, Ian had maximum sustained winds of 75 miles an hour and was moving to the north-northeast at 10 miles an hour. The storm had weakened to a tropical storm earlier in the day when it was still in Florida, but got stronger again once it moved back over the waters of the Atlantic.

A hurricane warning is in effect for the entire South Carolina coast.

A tropical storm warning has been issued for the entire Midlands. That list of counties includes Richland, Lexington, Sumter, Orangeburg, Saluda, Lee, Clarendon, Fairfield, Kershaw, Calhoun, and Newberry. That means winds between 25-35 miles an hour with gusts up to 45 miles an hour.

Heavy rainfall, flash flooding will be the greatest threat as the rain moves in early Friday. Widespread rainfall totals of 3 to 6 inches is forecast. Some isolated areas will probably get more than that. According to the Weather Prediction Center, the southeastern half of the Midlands is in a moderate risk for excessive rainfall.

These winds are likely to pass north of the area by Saturday afternoon, with generally decreasing southerly winds behind the system.

Severe weather, along with isolated tornadoes are possible, but given the current track, the highest threat will likely be along the coast. If the track were to shift, our threat could increase.

Our in-house forecast model takes the rain out of the area later in the day on Friday, but the global models keep the rain chances around through the weekend. As of now, we will keep a chance for rain on Saturday and Sunday in the forecast, but this could change depending on how fast Ian moves out of the area.

Some rain is possible, especially in the eastern half of the state. Winds will continue to increase to about 15 to 20 mph.

Heavy rain starts to move into parts of the state, including parts of the Midlands. Winds will be picking up to about 15-25 mph with some stronger gusts.

Heavy rainfall continues across the area especially east of I-77. Winds will be gusty, out of the northeast at 15-25 mph with some stronger gusts. With the heavy rain and winds, some power outages will be possible especially to the east.

Heavy rainfall continues for a large portion of the state, but the rain starts to taper off along the coastal region of South Carolina. Winds will still be strong at times, out of the northeast at 20-30 mph with gusts stronger around 40 to 50 mph.

Our in-house forecast model starts to bring the rain to an end. The global models keep the rain around through at least Saturday.