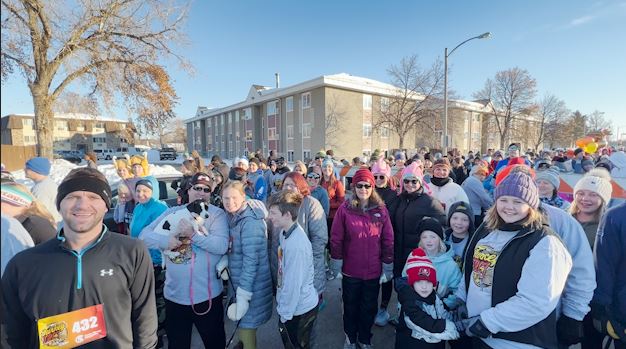 BISMARCK, N.D. (KXNET) — Traditions are a focal point around the holidays, and one local tradition raced for the finish line today. This morning, many put on their running shoes and ran off their Turkey dinner before it was even served.

The CFA Turkey Trot is the major fundraiser for the Cystic Fibrosis Association of North Dakota. And Costume runners went all out in the spirit of the holidays.”

“I have been the grinch for four or five years. It started with just a hat, and then I got the face. And this is real, I can’t just take this off,” said Ariann Doe, 5K Turkey Trot Runner.

33 years ago, a group of people came together to raise money for a friend needing a double lung transplant due to complications from Cystic Fibrosis. And there a tradition was born to so many. It turned into something the community supports and looks forward to every year.

Doe said, “I like doing all these races. Obviously, I get into the costume, and this is a race that a lot of people come to and it’s to have fun. You know, it’s not like all really competitive, because I don’t run that fast. I mean look at me.”

The CFA Turkey Trot is all about community. Nearly a thousand runners come from near and far to run along the Missouri river and all through our state’s capitol. The Turkey Trot welcomes all levels of athletes… with a timed 10K, a 5K, a 5K Race walk, and an un-timed fun walk, there is something for the whole family!

“I love running, and I thought I’d try it. It’s just like the adrenaline, it’s exciting, and it’s fun,” said Latoya Dutchuk, another Turkey Trot Runner.

With smiles and cheering all around, it’s easy to see why this event has grown so much. Moms, Dads, kids, and even Grandmas and Grandpas were ready to take off on the snowy pavement. As the crowd grew bigger and bigger, you could feel the energy in the air as the clock struck 9:15 A.M.

“We like the fun atmosphere and being outside, being outdoors. It’s a nice day today for it,” said Kim and Brady Feiring, who are Turkey Trot Veterans.

Runners expressed how thankful they were for this year’s run because of the sparkling sun that was shining upon them.

Kyle Downs was the 10K winner on the men’s side finishing in 36 minutes and 40 seconds. Lauren Evans from Reno won the women’s division, she ran the six miles in 40 minutes and 16 seconds.