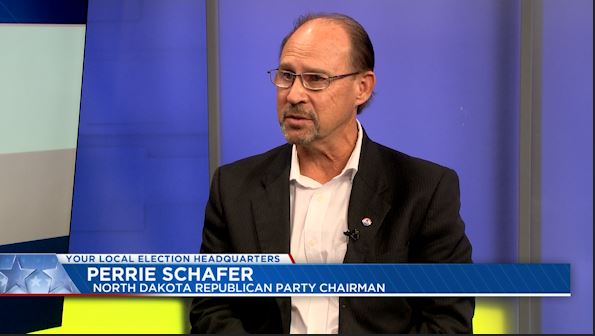 NORTH DAKOTA (KXNET) — He credits 35 years under republican leadership as a driving force behind North Dakota’s strong economy, but the divide within the party is undeniable.

Josh Meny sat down with North Dakota Republican Party Chairman Perrie Schafer to discuss the state of the NDGOP heading into November’s election.

The North Dakota Republican Party has been in control for a long time. That’s not looking to change. What does success look like for you in November?

“Yeah. Well, we’ve got two national seats that are upright at the moment, John Hoeven and Kelly Armstrong, and six statewide seats, provided the voters come out and vote, and we have a larger turnout and 15%. Try to get it up to that 40-45%. I think we retain our seats. And I think we continue moving the state forward,” said North Dakota Republican Party Chairman Perrie Schafer.

Now, Rick Becker, during the NDGOP Convention, it was a historic turnout of nearly 2,200 delegates, he lost to Hoeven by around 200. He obviously has enormous sway over the party, but he represents this wing of the party that’s abandoned traditional conservativism for a more counter-revolutionary approach. What do you say to the argument that you’re not conservative enough?

“Yeah, I don’t like the argument. Josh, thank you for the question. Yeah. If you go throughout the whole state and look at Eastern North Dakota to Western North Dakota, conservatism can be defined in a lot of different ways. I like to look at the platform. I like to look at what we stand for as Republicans. I like to go back 35 years and look at where we were under democratic rule to where we are today 35 years later, and look at how flushed the budget is. The agricultural markets we have today, the energy markets we have today. Not suggesting there is not any issues and problems because there is, but looking where we were then to where we are today is because of Republican values and leadership from the Republican Party,” said Schafer.

Now, the part of the party that we were talking about earlier, the Rick Becker’s the Charles Tuttle’s, you know, they think that America and the state that is not running the way that the founders intended. And they think that a big part of this is the administrative state. It’s eroding freedom, liberty. How do you feel about that? That once again, that same argument, you’re not conservative enough?

“Yeah. That’s partially true. To be very honest with you. I don’t want to say that that isn’t necessarily the case. In some cases. However, when you’re 80%, in agreement with the Republican platform, and you have fiscal proof, that administratively all the way down through our legislatures, through the different chairs we’ve had in our party, have the growth and the direction that state of North Dakota has taken with respect to building business and making a better place for us all to live. As a businessman, I’d rather have a business in the state of North Dakota, we cover eight states, then I wouldn’t do any of the other states that we sell into simply because of the mathematics that makes North Dakota work. So I partially agree that there are some administrative situations. I don’t necessarily see that in this state. I know that there are some arguments about how much money we spend and all of those kinds of things. There’s even some legitimate argument there to be very honest. But I think again, sitting down Josh, and having a conversation with these people, instead of viewing all of every other things we want to express out there on Facebook, or on some social media outlet. I would rather do this, have a conversation and talk about what some of those issues might be and figure it out. We move forward,” explained Schafer.