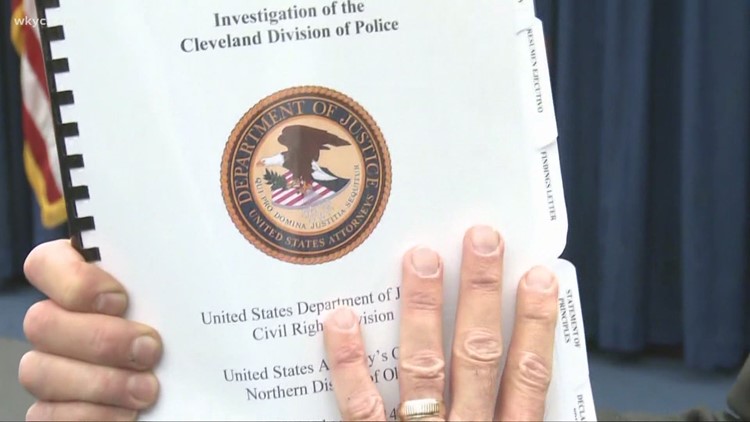 The report details slowly evolving ‘significant and critical areas of the consent decree that remain in non-compliance, including accountability and transparency.

CLEVELAND — For nearly seven years, federal oversight has been slowly mending the Cleveland Division of Police.

The latest semi-annual report released Thursday details why a federal monitor feels the change the department needs is far from finished. The 144-page report details slowly evolving “significant and critical areas of the consent decree that remain in non-compliance,” including accountability, search and seizure, transparency and oversight, plus more.

“We have a significant amount of very progressive police policy here in Cleveland, thanks to the consent degree and the work in the monitoring team and the community police commission and others,” Jason Goodrick, executive director for the Cleveland Community Police Commission, said.

“It’s clear that the city of Cleveland and the Cleveland police department is nowhere near being in compliance,” civil rights attorney Stanley Jackson countered. “That hearing made sure that we all understood how far out of compliance that they were.”

In an interview with 3News, Goodrick echoed “regular interruptions and challenges” mentioned in the report (such as the COVID-19 pandemic) that delayed progress, but said some progress has still been made.

“No one can debate that there’s been a lot of policy written,” he said, “and now the data is going to have to prove whether that policy is really being followed if it’s really working on the streets.”

In a first-page letter, court-appointed Monitor Hassan Aden detailed areas — such as use of force and crisis intervention  — that have reached reform that “nears substantial compliance.” However, Jackson said the public deserves more progress seven years down the road.

“We push for change, and it looks like we’re not getting that change at this moment,” Jackson claimed. “I would think that, considering that the DOJ was involved — we have a monitoring team and a federal judge — that the city would have tried to do more to comply.”

The report commends a new city consent decree implementation team initiated by Mayor Justin M. Bibb and his collaboration with the monitoring team, but also notes that as Bibb’s administration is beyond a transition phase, an “uptick in pace” is expected. Bibb, who was later seen at the Browns’ Thursday night home game, did not attend the hearing that was scheduled for 3 p.m.

Enjoyed being with leaders from @AARP to discuss how we are leveraging the American Rescue plan to support Cleveland’s seniors. #AgeFriendlyCities https://t.co/byGZPtWeMj

Consent decree hearings happen twice a year. Jackson and others were critical of Bibb for not attending after campaigning on a platform of police reform. Goodrick told 3News Bibb was present at a previous hearing.

A spokesperson for Bibb has not responded to our questioning of why he did not prioritize this hearing. However, they did tell 3News that the city’s law department clarified that the Federal District Court Judge Solomon Oliver Jr., who is assigned to the reform, did not request Bibb’s presence.

This process also comes with a hefty price tag: Goodrick told WKYC each year the consent decree remains in place, between $6 million and $10 million are invested into the process.

You can read the entire review below: