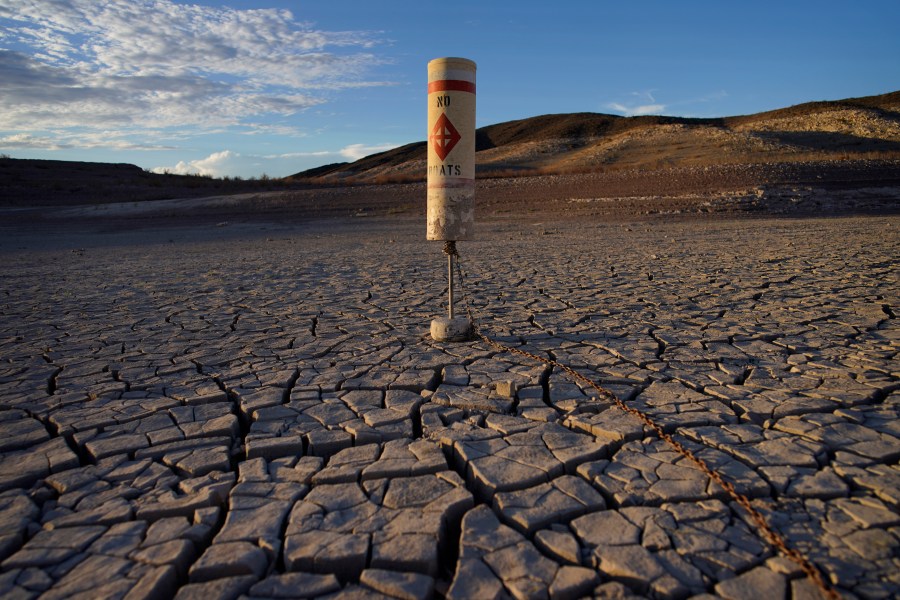 WASHINGTON (AP) — People in Arizona and Nevada won’t face bans on watering their lawns or washing their cars despite water shortages on the Colorado River.

But officials said Tuesday there will still be less water available next year from the river that serves 40 million people in the West and Mexico. Observers say a reckoning is still coming for the growing region.

New cuts will build on this year’s reductions — which all but eliminated some central Arizona farmers’ Colorado River water supply and to a much lesser extent, reduced Nevada and Mexico’s share.

Tuesday’s decision and what was left out point to growing uncertainty in the West.

Lake Mead and Lake Powell — the two largest reservoirs on the Colorado River — are about a quarter full, threatening water supplies and the generation of hydroelectric power used by millions of people.

Along the reservoirs’ edge, “bathtub rings” of minerals outline where the high water line once stood, highlighting the challenges the West is facing as a ‘megadrought’ tightens it grip on the region.

A look at who is affected by another round of water cuts in the West.

WHICH STATES WILL BE AFFECTED BY THE CUTS?

Arizona was hardest hit, again, and will receive 79% of its total share next year. But that’s only 3% less than what it got this year, after federal officials slashed its supply.

Nevada will receive about 92% of its total supply next year. Most residents will not feel the cuts thanks to water conservation, reuse and the state not using its full Colorado River allocation.

California has been spared from cuts because it has more senior water rights than Arizona and Nevada.

Mexico will get roughly 93% of its total supply. The water is used in cities and farming communities in Northwestern Mexico, where a severe drought is taking place, too.

WHO WILL SEE THEIR WATER SUPPLY CUT?

Farmers in central Arizona, among the state’s largest producers of livestock, dairy, alfalfa, wheat and barley, lost most of their Colorado River allocation last year when the government announced its first shortage. Some farmers were compensated with water through deals with cities like Phoenix and Tucson.

More farmers will likely need to fallow land — which some of the region’s farmers have been paid to do — and rely even more on groundwater. Others will have to grow more water-efficient crops and find other ways to use less water.

Western water suppliers have planned for such shortages by diversifying and conserving their water supply. Still, regular cuts amid intensifying drought that is depleting reservoirs faster than scientists predicted will make it harder to plan for the future.

Phoenix, the nation’s 5th largest city, will lose some of the water it would otherwise store in underground basins as a water savings account, said Cynthia Campbell, the city’s water resource management advisor. That happened this year, too. The city will rely more on the in-state Salt and Verde rivers, which boost its Colorado River supplies.

The city’s residents will not be affected by cuts next year, Campbell said.

Meanwhile, Nevada recycles the majority of the water used indoors and doesn’t use all of its Colorado River water. That means residents will barely feel next year’s cuts.

WHO DOES LAKE MEAD SERVE?

Cuts for 2023 are triggered when predicted water levels fall below a certain threshold — 1,050 feet (320 meters) above sea level.

Additional cuts will be triggered when projected levels sink to 1,045 and 1,025 feet (319 and 312 meters). At a certain point, water levels could drop so low that water can no longer be pumped from the reservoir.

Eventually, some city and industrial water users will be affected.

Lake Powell’s levels are also falling and extraordinary steps have been taken to keep water in the reservoir on the Arizona-Utah border.

After the lake fell low enough to threaten the roughly 5 billion kilowatt hours of energy generated each year at the Glen Canyon Dam, federal officials said they would hold back some water to ensure it could still produce energy. The dam produces enough electricity to power between 1 million and 1.5 million homes each year.

Colorado, New Mexico, Utah and Wyoming get water from tributaries and other reservoirs that feed into Lake Powell. Water from three reservoirs in those states has been drained in recent years to maintain water levels at Lake Powell and protect the electric grid powered by the Glen Canyon Dam.

HOW IS THE RIVER WATER SHARED?

Water stored in Lake Mead and Lake Powell is divvied up through legal agreements among the seven Colorado River basin states, the federal government, Mexico and Native American tribes. The agreements determine how much water each entity gets, when cuts are triggered and the order in which the parties have to sacrifice some of their supply.

Under a 2019 drought contingency plan, Arizona, Nevada, California and Mexico agreed to give up shares of their water to maintain water levels at Lake Mead. This year’s cuts are part of that plan — and as a result, they were predicted by states and others.

WHAT WAS LEFT OUT OF TUESDAY’S ANNOUNCEMENT?

Much more significant water cuts. In June, the U.S. Bureau of Reclamation told the basin states — Arizona, California, Colorado, Nevada, New Mexico, Utah and Wyoming — to figure out a plan to use at least 15% less water from the river next year — to prevent reservoir levels from dropping even further.

The deadline to reach that deal has passed and states failed to reach an agreement. Federal officials on Tuesday did not say how much time states will have to reach one.

The Associated Press receives support from the Walton Family Foundation for coverage of water and environmental policy. The AP is solely responsible for all content. For all of AP’s environmental coverage, visit https://apnews.com/hub/climate-and-environment