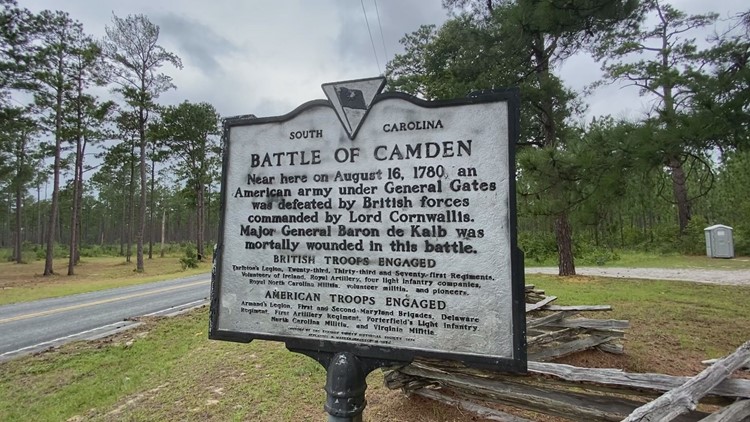 242 years later, a wreath and flags lay on the former battleground site.

CAMDEN, S.C. — The Revolutionary War took place from 1775 to 1783, when America secured independence from Great Britain. One place that was a part of that hard battle was Camden. 242 years later, a wreath and flags lay on the former battleground site.

Rickie Good, the Director for the Revolutionary War Center in Camden, said it’s an important day to the community as they look back at what occurred.

“Charleston had fallen a few months before, the thing about capturing Charleston is they had already taken over Savannah and they we’re taking over the southern states,” Good said.

After capturing the coastal town, they spread out in the backcountry and Camden was the perfect site.

“It  was the location, we were next to Wateree, the Catawba-Indian path,” Good said. “These were great trade routes that had been used for centuries. The British we’re going north on the road and the Americans are coming sort of south on the road and they met that night, and they decided both sides they would fight that morning as soon as dusk or dawn comes up.”

It was a battle the British won. “It was almost a year that Camden was a British garrison,” Good said.

Then the Americans fought back and, not long after, the British were pushed back to the coast.

RELATED: No, the Declaration of Independence wasn’t signed on July 4, 1776

Good says it was a significant time in the city’s history.

“It wasn’t an easy choice which side you we’re going to pick, especially here in South Carolina and when the Americans lost was the second American army to be destroyed in less than 6 months, it would’ve been very easy for the rest of the patriots to say this isn’t going to work, we’re done, but they didn’t.”