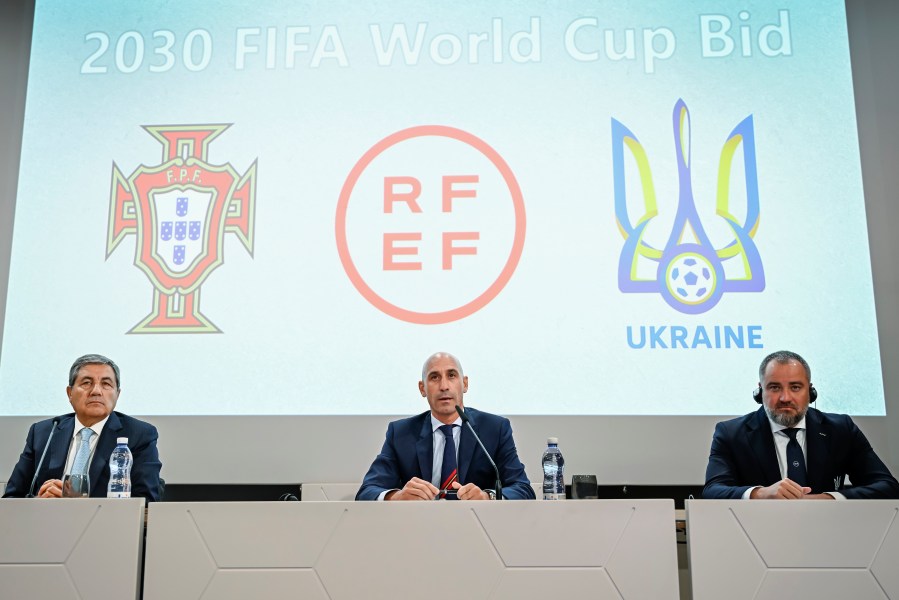 NYON, Switzerland (AP) — Hosting World Cup matches in 2030 would be “the dream of people who survived the horrors of war,” Ukrainian soccer federation president Andriy Pavelko said Wednesday after his country launched a joint bid with Spain and Portugal amid the invasion and occupation by Russia.

The leaders of the three soccer federations joined together at UEFA headquarters to present a campaign they hope will connect people beyond the world of sports.

“This is the dream of millions of Ukrainian fans,” Pavelko said in translated comments at a news conference, “the dream of people who survived the horrors of war or are still in the occupied territories and over whom the Ukrainian flag will surely fly soon.”

Pavelko said the project is backed by Ukrainian President Volodymyr Zelenskyy. It aims to bring the World Cup back to Europe 12 years after Russia hosted.

The expected Spain-Portugal bid, which has been in the works for more than three years, previously was made UEFA’s preferred candidate. About 200 FIFA member nations will vote on the host in 2024.

“Now it’s not the Iberian bid, it’s the European bid,” Spain soccer federation president Luis Rubiales said at the launch. “Together we represent the power of transformation football has in society.”

No details were given about how many games at the 48-team World Cup would be staged in Ukraine or in which cities. The 70,000-seat Olympic Stadium in Kyiv hosted the finals of the 2012 European Championship and the 2018 Champions League.

The European bid is facing a South American candidacy with co-hosts Argentina, Chile, Paraguay and Uruguay, which wants to mark the centenary of hosting the inaugural 1930 World Cup.

Saudi Arabia, which has built close ties to FIFA and its president, Gianni Infantino, has been preparing to anchor a bid potentially including Egypt and Greece.

It is unclear how Greece would be approved by UEFA to be part of such an unprecedented multi-continent idea that was aired last month and appears to have accelerated the revised European bid.

UEFA president Aleksander Čeferin had a front-row seat for part of the launch though left before the end and no UEFA official formally took part or took questions.

Rubiales, who like his Portuguese counterpart Fernando Gomes is a UEFA vice president, said soccer officials in Spain had recent talks with the national government and royal family as part of the process toward teaming with Ukraine.

Pavelko said he believed since the first days of the war in February that soccer could help unite the world with Ukraine, which co-hosted Euro 2012 with neighboring Poland. That event had just 16 teams playing in four cities in each country, while the 2030 World Cup will have 48 teams likely needing about 15 venues.

Ukraine’s ambition increased when the national league that was suspended in February started a new season in August — in stadiums with no fans and bunkers for players and officials to shelter during air raid alerts — and was a popular success.

President Zelenskyy then “fully supported that the next step should be the organizing maybe of a big tournament,” Pavelko said. “We realize that Ukrainian people feel football (is) a good opportunity to come back to normal life.”

A symbolic victory for Ukrainian soccer would be if World Cup games are played in the nation’s second most famous stadium, the Donbas Arena in occupied Donetsk that was built ahead of Euro 2012.

The Shakhtar Donetsk club has been exiled from its home stadium since 2014 when conflict started in eastern Ukraine between pro-Russia separatist groups and government forces.

“We will have enough time to renovate the Donbas Arena,” Pavelko said, though it is unclear how damaged the 52,000-seat venue has become.

Asked if Ukraine could accept the Russia team playing on its turf in 2030, Pavelko said “it can’t be my personal decision.”

All Russian teams are currently banned from international competitions for security reasons by UEFA and FIFA, which removed the men’s team from 2022 World Cup qualifying playoffs in March. Poland had first refused to play its scheduled game against Russia.

If Russia is reinstated and then qualified for the 2030 edition, its path through the tournament could be steered in the draw toward playing in Spain and Portugal.

Ukrainian teams have continued to play in international competitions with most “home” games organized in Poland.

“I am absolutely sure,” Pavelko said, “that all the boys and girls who are now in the occupied territories of Ukraine will have the chance of playing in these (World Cup) stadiums under the Ukrainian flag.”