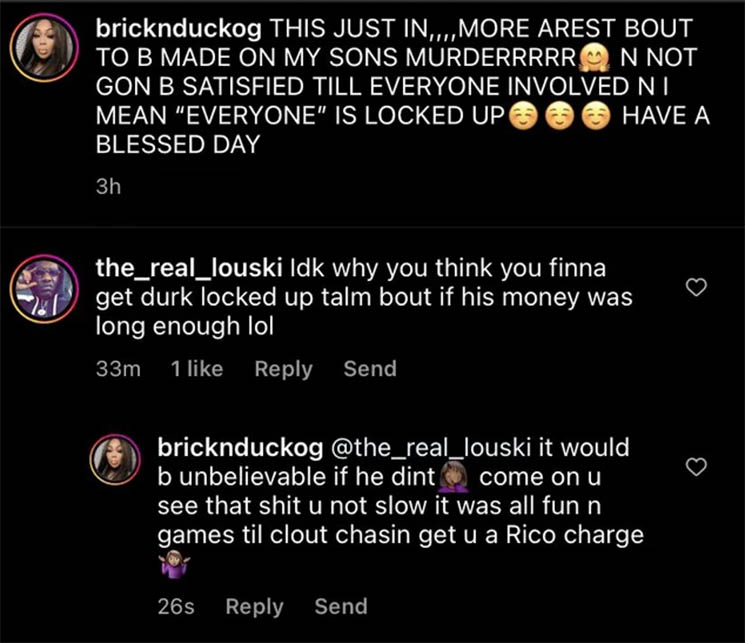 Mama Duck’s comments went viral on Tuesday because she also predicted Lil Durk’s gang associates would be arrested and charged with the murder of her son.

King Von also gave the FBG Duck killers diamond O-Block chains which he had custom made by Ice Box jewelers in Buckhead Atlanta.

FBI releases documents that claim to have interviewed a witness who said King Von originally placed a $50,000 hit on FBG
Duck then increased it to $100,000. After the murder, they claim he celebrated by cutting everyone’s ‘O Block’ chains pic.twitter.com/2BjayW2VBa

In 2021, the FBI took over the FBG Duck murder investigation. 5 suspected members of the O-Block street gang have been arrested in October 2021.

The best known of the 5 suspects is Muwop, 24, pictured here with King Von.

After King Von died, Lil Durk (R) took Muwop (L) on tour with him as one of his bodyguards.

Muwop is the only suspect whose legal fees are being paid by Lil Durk. The 5 murder suspects are being held without bail in Chicago.

In the video below, King Von is seen paying $100,000 to Muwop and others months before FBG Duck was murdered.