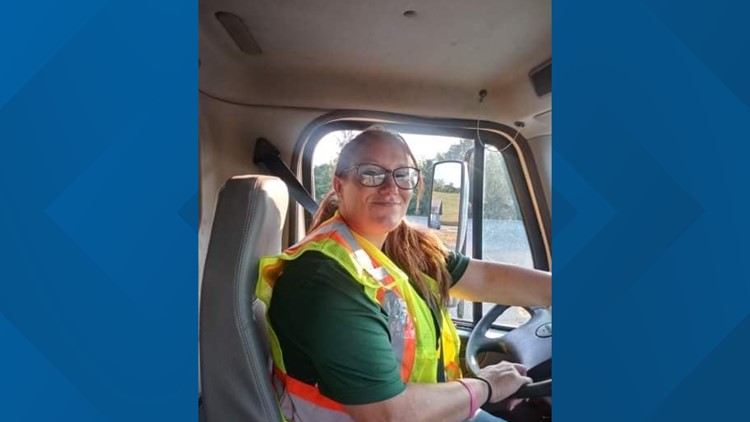 Amid a drug epidemic, an East Tennessee woman offers hope for overcoming addiction with the help of a ministry, the city of Knoxville, and a dream.

KNOXVILLE, Tenn — Krystal Brown said it all started with the simple question, ”Where do you see yourself in five years?”

“I remember thinking about it and I was like, ‘Man, I really just want to drive a dump truck.'”

Today, Brown handles heavy equipment with ease.  An internship with the city of Knoxville’s Second Chance program turned into a full-time job. Though, Brown admits she’s been given plenty of chances in her 35 years.

“I had some loneliness issues in my childhood, missing my dad and stuff like that. And my mom worked a lot.”

At 12, Brown filled the emptiness with Xanax and hydrocodone given to her by a family friend.

“I would take them and I would feel numb and that’s what I wanted to feel,” Brown said.

During a 20-year cycle of recoveries and relapses, Brown lost custody of her two daughters and contact with her beloved grandparents. She eventually landed in jail for selling drugs.

She remembers the moment police swarmed her.

“When they set me down on the curb I was so thankful. I was so tired of the lifestyle I was living.”

Out of jail and in recovery, Brown goes on to recount a life-changing conversation with a friend.

That program is a faith-based ministry called A Hand up for Women. Eva Pierce is the executive director. Brown reached out to her.

“I thought, ‘She won’t be back. She won’t even come to orientation.’ Well, she shows up. Krystal grabbed onto everything we offered, ” Pierce said.

Teachers and mentors with the non-profit share life management and work readiness skills with women recovering from abuse, addiction, and despair.

It was Pierce who asked Brown where she saw herself in 5 years and recommended her for the Second Chance program.

“The city saw what we saw, and it was just pure determination. She was just done with the former things, ” said Pierce.

Brown has reconnected with her daughters. She also reconciled with her grandparents and cared for them in their final days.

Given a “hand-up” and more than a second chance, Brown said she’s equipped for what’s ahead.

“Everything I have now is something I didn’t have before, but what I prayed for and I worked for… and I’ve worked way too hard to turn back now.”