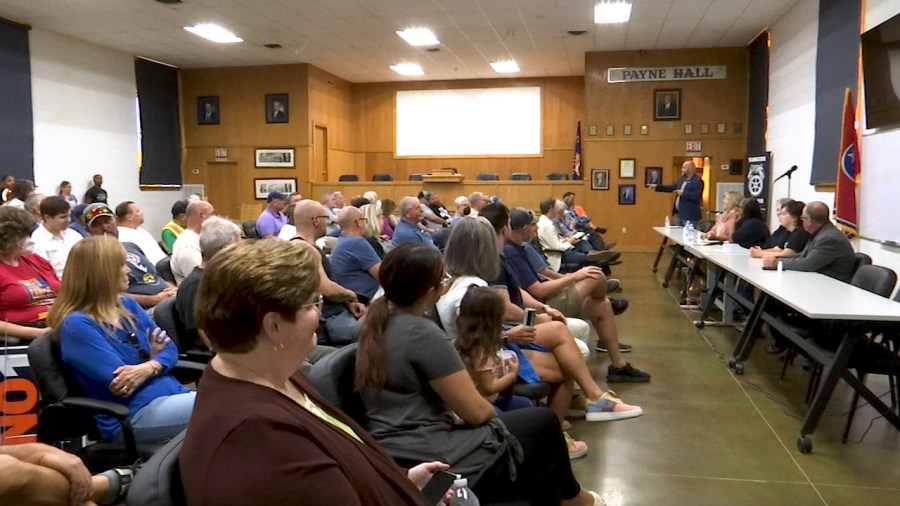 KNOXVILLE, Tenn. (WATE) — Four proposed amendments will be on the ballot during the upcoming election in November as people debate Constitutional Amendment #1. Voters will be asked to check ‘yes’ or ‘no’ on whether the ‘right-to-work’ law should be added to Tennessee’s constitution.

There was hardly an empty seat Thursday evening at the Teamsters Local Union 519 in Knoxville as many questioned making an addition to the state’s constitution. Tennessee for All, a statewide coalition, organized the meeting.

“Democrats, Republicans, Independents, are everyday workers and they continue to take us for granted each and every day,” Local Union 519 President and Business Manager Wes Trotterchaud said.

“It’s overkill for them to try and put in the constitution the origins of right-to-work laws, the roots of them are about dividing workers,” said June Rostan, a representative from the Knoxville-Oak Ridge Area Central Labor Council.

Tennessee’s ‘right-to-work’ law has been on the books for decades saying workers in the state can’t have a portion of their wages taken for union dues unless they agree to allow it.

“It’s extremely important that we preserve and protect the right of Tennessee workers,” Republican State Representative Jason Zachary said. “And this has been prompted by some of the saber-rattling up in Washington that they’re going to take away the ‘right-to-work’ provisions within the states. They were going to try to pass legislation federally to pop us as states, and so we’re simply saying, ‘No, we’re going to stand for Tennessee workers.’”

Many union members argue the ‘right-to-work’ law forces them to pay for representing workers in negotiations who are not paying their share of dues.

“Every state that’s a ‘right-to-work’ state has lower wages than those who do not. And so, this is about a right to work for nothing and I’m getting tired quite frankly of Governor Lee asking folks, CEOs and businesses to come in because they can do so well with cheap labor,” Democrat State Representative Gloria Johnson said.

Ava Marlow is a member of Starbucks Workers United. Recently, employees at a store in Alcoa planned a three-day strike for union rights earlier this month.

“I’ve directly seen the effects of the right-to-work law in my workplace. It’s caused a huge divide between several of my coworkers and I because they don’t want to pay dues and I still have to go to bat for them,” she said.

“Everyone should have the right to say ‘yes’ or ‘no’ and if you look at the right-to-work states like Tennessee, Texas and Florida, our economies thrive and it’s been a part of our fabric for 75 years,” Zachary said.

“Their attempt is to promote big corporations, the powerful elite, to drive down wages, to drive down health benefits and to create a workplace that is driven by domination of the managers and the supervisors in the corporations,” Trotterchaud said.

While a ‘no’ vote on Constitutional Amendment #1 on Nov. 8 won’t remove the ‘right-to-work’ law, some believe the proposal is just a move to score political points in the corporate world.

WATE also spoke with Republican State Senator Becky Duncan Massey over the phone about Constitutional Amendment #1 and she is in favor.