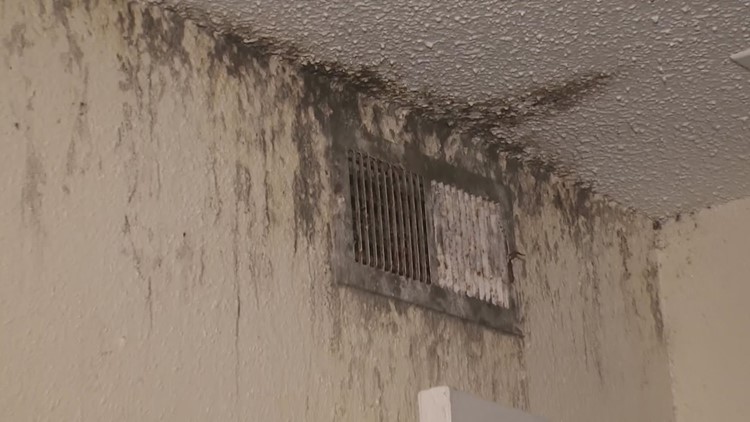 Some have rodent problems while others are dealing with no air conditioning. They want it fixed but aren’t getting very far with the complex.

HOUSTON — The residents at a northeast Houston apartment complex are begging for help, saying their homes are unlivable.

Online, the website for Sterlingshire Apartments boasts a beautiful, spacious living community, but the residents who actually live there describe a much different reality.

“That there is a bullet hole right there,” Hattie Utley said.

For Utley, a bullet through her front window isn’t her only worry.

“See, these roaches right here, the roaches are coming up in here,” Utley said.

Quianna Hall hasn’t had air conditioning in three months. She and her son sleep in the living room with the only cool air.

“Because it’s so hot, we just try to survive but it’s hard,” Hall said.

Robert Russell had to fix his own AC, but his faucet never stops running.

And Latrice Bass has to chase the rats away. She said they come in through the holes in the floorboard.

“We try to plug it up with either plastic or something we find, and they just chew it back in and take whatever we put in the hole and run back out,” Bass said.

From rodent droppings to mold and holes, almost every tenant you talk to says the apartments are unlivable.

Thursday evening, a few city leaders took a tour of the property themselves.

Councilmember for at-large Position 4 Dr. Letitia Plummer said the city could shut the complex down, but the goal is to get the issues fixed.

On Thursday, a public works employee put a notice of deficiencies on the complex’s window, but residents said something needs to change not just for them, but for their kids as well.

“This is partially jail. You’re just standing here, and it’s like depressing and sad,” Hall said.

KHOU 11 News was able to speak to some employees inside the leasing office Thursday. They said they would send us a statement in response to these claims, but we have not yet heard from them.

The city of Houston issued this statement:

“The City of Houston received multiple complaints to 311 regarding the Sterlingshire Apartments at 9002 Sterlingshire St. Several City departments investigated the complaints, including Houston Public Works, Department of Neighborhoods, Houston Health Department, Solid Waste Department and Houston Police. The City found several violations needing to be addressed. Sterlingshire has various internal and external violations on the property that are a threat to public health and safety. Houston Permitting issued a red tag stop-work order on June 21, 2022, for repairs underway without the proper permits. The Houston Health Department has been available at the apartment complex for residents to file any complaints regarding interior issues. The Department of Neighborhoods has informed the manager about corrections on the property not meeting compliance. Our investigators are working with management to ensure these repairs are made in a timely manner. We encourage the community to report any possible health and safety complaints to 311 in order for the City to investigate.”