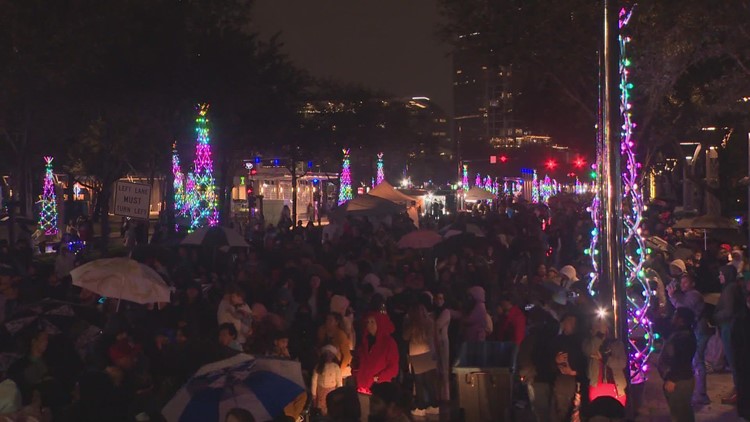 “It makes me feel like we’re coming close to a holiday,” said 11-year-old Kevin.

Attendees were thankful the weather cooperated and they got to witness this Thanksgiving evening’s 34th annual lighting of some 300, 20-foot Uptown trees.

“I told everybody you won’t believe it. I know it’s raining but the little chance that it’s not, it’s going to be the most awesome show that you’ve had,” said attendee Chris Pancheri.

And vendors like Hermelinda whose Mi Pueblito was selling tasty treats were also grateful the forecast let them do business ahead of the holidays.

“It would have been hard because she invested in all of this and if it didn’t happen then it would all go to waste,” said Hermelinda through her granddaughter Itzel Romero.

A balcony-lighting contest also took place and Santa showed up to greet everyone there, perched on a firetruck.

And while the lights certainly turned up the holiday spirit, it was the fireworks that stole the show.

“It was very cool, and it was just a time to spend with family,” said Kevin.