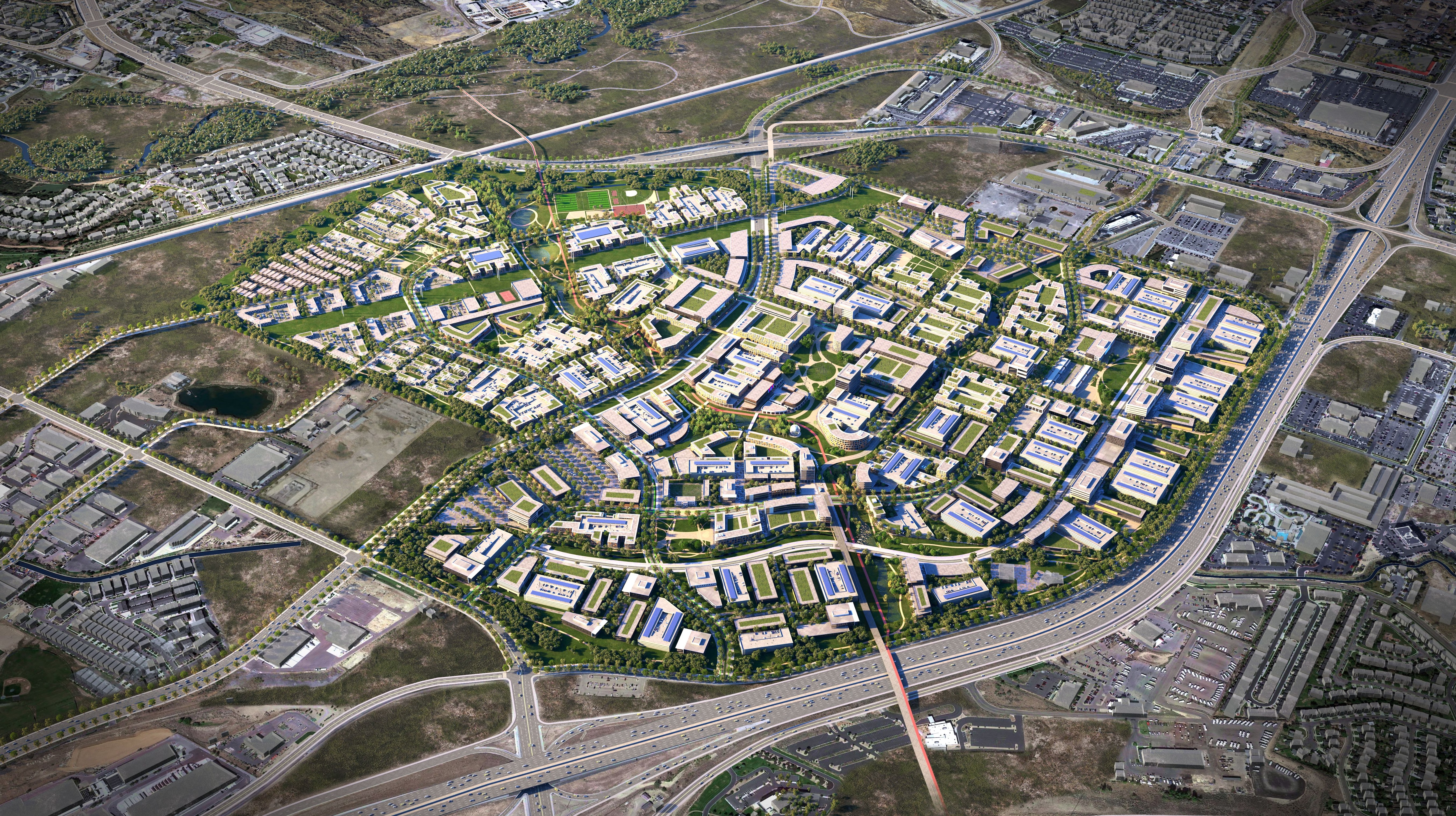 Join The Tribune in a community conversation about Point of the Mountain as a seedbed for innovation.

(Rendering by Skidmore, Owings & Merrill, via Point of the Mountain State Land Authority) A bird’s eye view of The Point, a Utah-backed housing and economic development project proposed on 600 state-owned acres at Point of the Mountain in Draper. The state envisions an “innovation district” at the site that will bring together academic and industry experts.

Can 600 acres in the middle of suburbia be a thought center?

The ambitions behind development of the old Utah State Prison site in Draper could hardly be higher. Plans call for a “15-minute city” where people can live, work, shop and play within walkable distances. And if it’s more than a walk, there will be electric buses. Power will come from batteries and geothermal heat. The natural world will be prominent in open spaces and in a river-to-range trail running from the Jordan River to the Wasatch Mountains.

It is intended to be a physical representation of what the future could be.

But the vision for “The Point” goes beyond a demonstration project. The state wants it to be a gathering place for the top minds from academia and industry to tackle the most vexing societal problems.

The first 160-acre phase includes an “innovation district,” which the project’s framework plan describes as “a place that promotes a culture of creativity and ingenuity, attracts outstanding talent and investment, promotes solution-oriented research, fosters the growth of promising early-stage companies, eliminates regulatory barriers, and facilitates interdisciplinary industry and academic partnerships to generate and commercialize new ideas.”

Key to that dream is connecting the state’s robust research institutions, said Jefferson Moss, a state legislator who works for the Utah System of Higher Education and serves as the Point’s innovation district project director.

“It’s a collaborative space,” said Moss, who added the innovation district will be centered around a “convergence hall” for meetings and presentations.

Moss cites health care and technology as one example where different disciplines are coming together. “We know health tech is becoming a much bigger area. It’s the blending of those two areas.”

“We want the technologies we focus on to improve Utah’s quality of life and have an impact on the world,” said Theresa Foxley, CEO of Economic Development Corporation of Utah.

EDCU’s role is attracting the right companies to the project, drawing on innovative firms both inside and outside the state.

“We want it to be sticky,” said Foxley, meaning industries that are less likely to draw offshore competitors. That includes aerospace and defense but also critical industries where the United States wants to increase domestic production, like batteries and other energy technologies. She also looks for places where Utah has a natural advantage like tax policy or natural resource requirements.

“What’s the Point? Utah’s Laboratory for Innovation” is a community conversation that will explore development of the old Utah State Prison site in Draper into an incubator for modern solutions. The event will be held Nov. 30 at 4 p.m. at Silicon Slopes, 2600 West Executive Parkway, Suite 140, Lehi. The intent is to bring together Utah’s universities at the site to develop solutions to a wide range of challenges Utahns are facing across the state. What will that mean? That is what we will aim to find out in this conversation, which is sponsored by The Salt Lake Tribune and Rocky Mountain Power. It also will be streamed at sltrib.com. Participants will include Theresa Foxley, CEO of Economic Development Corporation of Utah, Jefferson Moss, the Point’s Innovation District project manager and a state legislator, and James Campbell, director of innovation and sustainability policy for PacifiCorp/Rocky Mountain Power. Tribune renewable energy reporter Tim Fitzpatrick will moderate. Those interested in attending can RSVP at www.eventbrite.com/e/whats-the-point-utahs-laboratory-for-innovation-tickets-468006288407.

Foxley said they’re still in the initial stages of assessing the best industry fits. “We’re going through the discovery process.” (Demolition of the old prison will begin next week, and construction is expected to begin next year.)

She said they want to align with the sector priorities of the Governor’s Office of Economic Opportunity: financial services, information technology, life sciences, aerospace and defense and advance manufacturing.

She sees the Point’s role being more on the research and development side in support of manufacturing, rather than being home to manufacturing plants.

They’re looking for “nascent but promising technologies” that could be helped by state research and support. “There’s a lot of risk to operating on the bleeding edge. We’re trying to mitigate that risk by evidencing there is market support.”

Moss said they are also aligning with the state’s Talent Ready initiative for workforce training to identify the skills needed by these emerging industries. And that requires coordination with all 16 of the Utah System of Higher Education’s schools, including the applied technology programs. Not all of those talents require college educations.