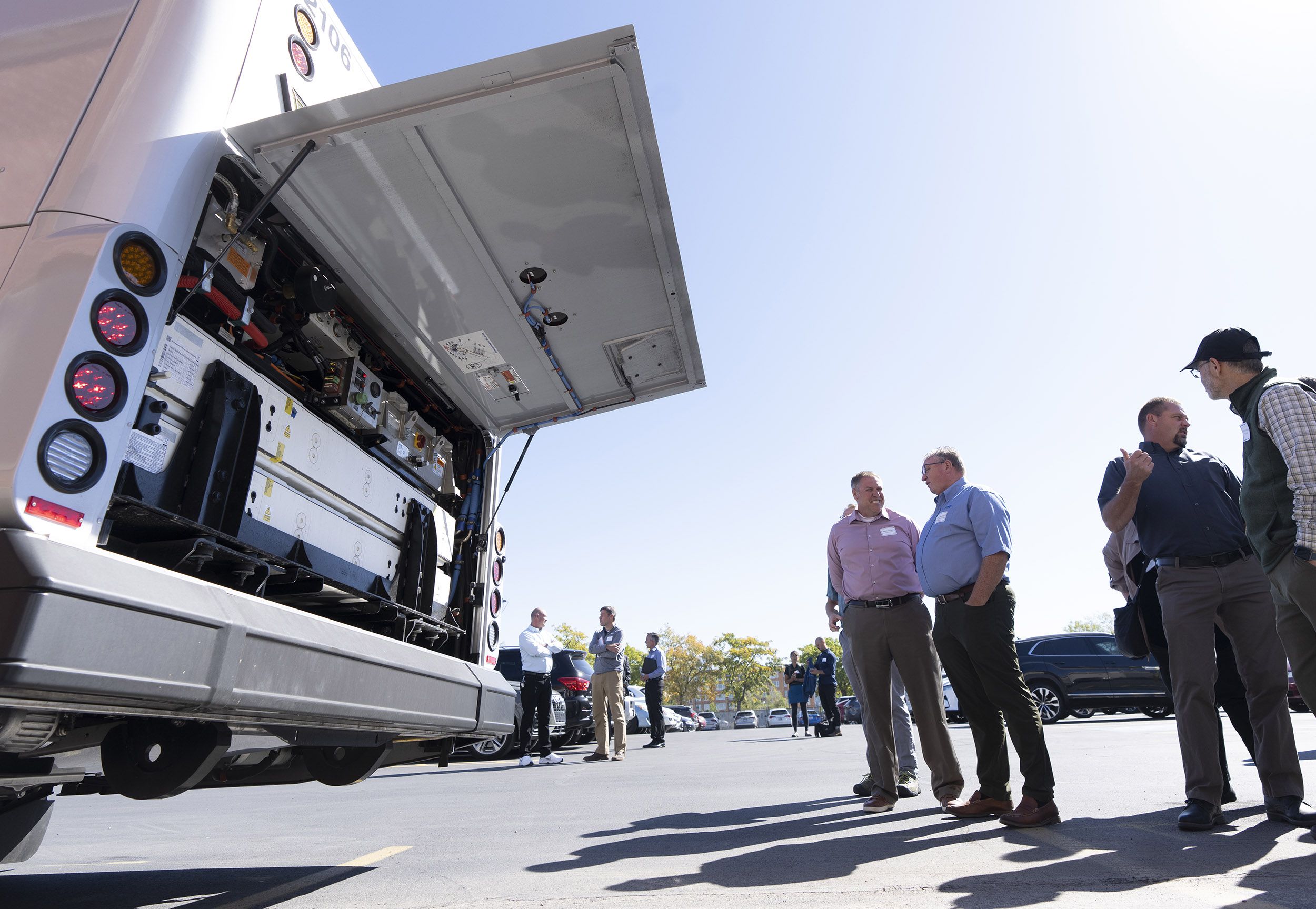 (Rick Egan | The Salt Lake Tribune) Participants check out the battery in an electric UTA bus, during a UTA electrification forum, on Friday, Sept. 23, 2022.

A new electric bus, with that fresh-off-the-lot scent typically found in private vehicles, was a star attraction Friday at the Utah Transit Authority’s first ever forum on electrifying transportation across the state.

That scent “won’t last long,” said Jonathan Salazar, the maintenance manager for the Ogden UTA fleet, to which this particular bus belongs. The vehicle, he noted, features many other more permanent qualities, from improved torque to a nearly silent operating system.

UTA employees, state and local officials, and transit experts gathered on a bluebird afternoon to view the electric bus and tour the Depot District Clean Fuels Tech Center at the transit authority’s Salt Lake City headquarters. The message of the morning focused on the importance of interagency projects and the formation of private/public partnerships in furthering cleaner energy for mass transit’s future.

Discussions on how to “power up Utah,” began with an introduction from UTA Board of Trustees Chairman Carlton Christensen.

“Our purpose is to lay the foundation of a shared vision for an electrified transportation infrastructure across the Wasatch Front,” Christensen said. He noted the UTA board recently discussed striving to implement a 40% battery electric fleet within the next 20 years.

“However,” Christensen said, “the progress we can all accomplish working together will far exceed what we can do individually.”

The UTA currently runs 13 electric buses. The agency has 20 more “on order,” said UTA spokesperson Carl Arky, adding that he couldn’t say exactly when they’ll be deployed due to supply chain volatility.

Regan Zane, Director of Utah State University’s Aspire Research Center, echoed Christensen’s comments. “Approaching this with a common, coordinated approach can actually lead to a cost effective solution driven by the market rather than driven by regulation at any cost,” Zane said.

His presentation centered on the costs associated with electric infrastructure, and in particular the inefficient and relatively expensive way power is distributed along the electrically powered TRAX lines.

Instead, he’d like to see a system where electric buses, trains and vehicles all use a “multi-megawatt substation” to bring overall costs of charging down.

“I think the gas station model, which is what we’re following right now, is not the right model,” said James Campbell, innovation and sustainability director with Rocky Mountain Power. “We’re going to go away from that as technology develops.”

Research and pilot projects are also underway that could put Utah at the forefront of air quality and clean energy.

Part of that monitoring approach has included placing three types of air monitor sensors on three UTA electric buses. The three buses have been running and collecting data along the west and east sides of the Salt Lake Valley for roughly eight months.

“The pilot has been designated a successful project,” said Michael Shea, Sustainability Director for Salt Lake County. The next step will entail placing monitors on the 22 additional electric buses UTA is slated to receive next year, he said.

Once that’s completed, Shea said, the region “will create one of the most detailed pollution mapping systems in the world.”

Funding discussions, of course, are also on the table. With public/private collaborations, federal dollars could be leveraged and even Volkswagen legal settlement funds are being targeted to help the state further build out faster charging stations along key corridors in the coming years.

While talk of electrification’s promise and progress fueled the event, the realistic question of “how soon” also surfaced. When might renewable energy play a bigger role in powering the state’s grid? (According to data from the Energy Information Administration, coal-fired power plants accounted for 61% of Utah’s electricity net generation in 2021).

Campbell with Rocky Mountain Power couldn’t provide an exact date, but did note an ongoing nuclear project in Wyoming and the utility company’s plans to retire more coal plants in the coming years.