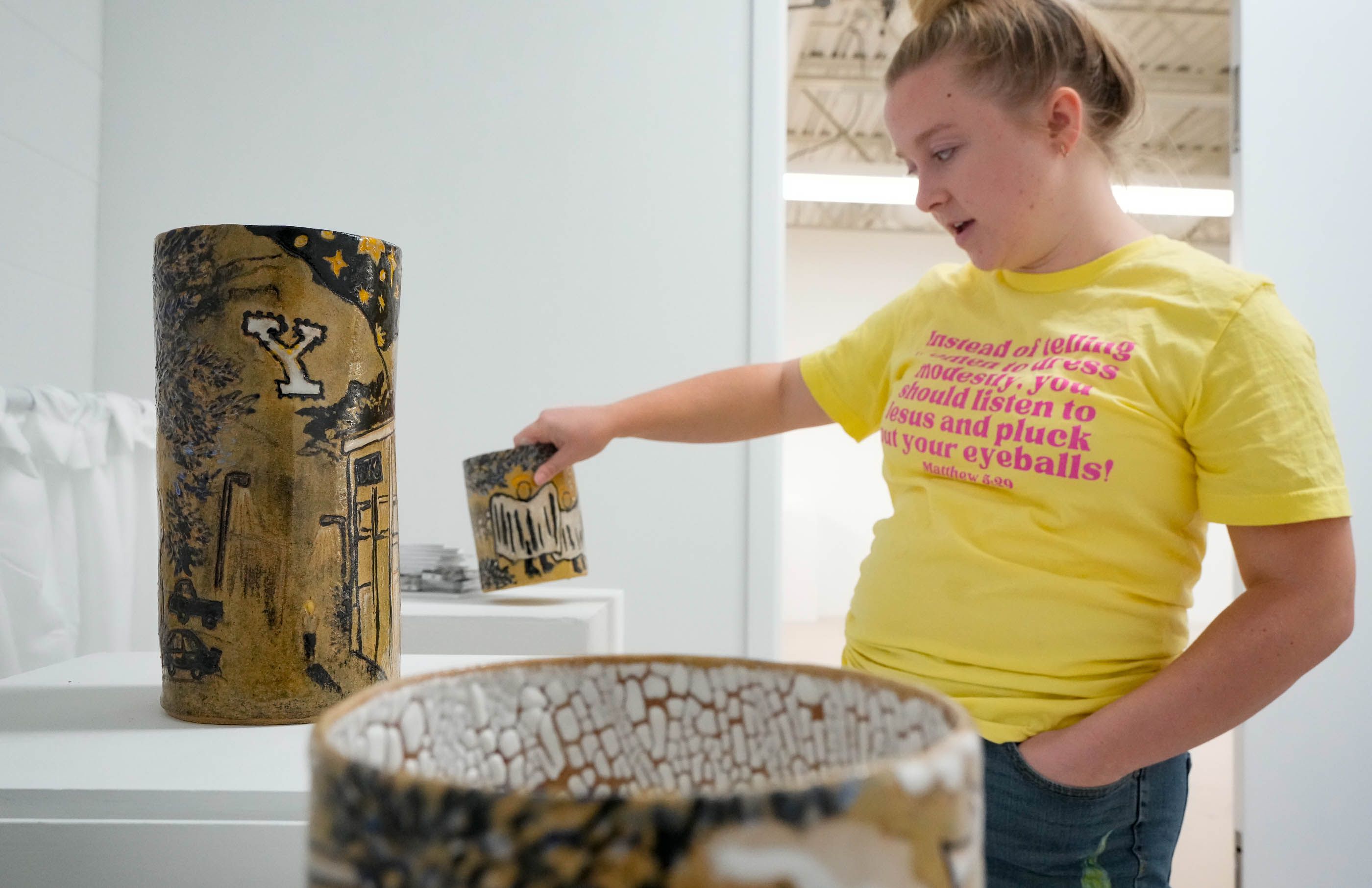 Maddison Tenney was working on a ceramics project late one night in the old B66 building at Brigham Young University when a message on her phone made her run outside, her hands still covered in clay.

Looking up at the mountain above the school, she smiled to see it was true: A group had stealthily lit up the namesake “Y” on the hillside in rainbow colors, a demonstration against the private religious school’s LGBTQ policies.

Tenney stood there on the chilly March 2021 night in her apron, staring at the display. That was the first time, she said, she felt like she wasn’t alone on campus. As a queer student who felt she had to hide that part of herself, Tenney said, “suddenly I felt like I could be myself here. It was this beautiful and divine moment.”

She credits that night with helping her come out to more people as queer and come into her own at the school sponsored by The Church of Jesus Christ of Latter-day Saints. And now, she’s using that experience and those she’s had since as an LGBTQ student there as inspiration for her art.

Tenney has a new exhibit on display at the Provo school that explores the intersection of her sexuality and spirituality. It focuses on those similar moments she describes as having felt “divine” for both of her identities.

Her art is on display in an exhibit through Dec. 6 that she’s titled “Wholly Divine.” The idea is that she is whole and holy as a queer and LDS person.

“This is the most vulnerable art I’ve ever made,” said the 24-year-old senior at BYU, where she’s studying art and English literature.

It might seem surprising that the school didn’t push back on or block the exhibit from being displayed — which Tenney said she initially expected.

Though the faith doesn’t ban gay members from attending services, they are instructed not to act on their attractions; if they do, they face potentially being ousted from the church. Likewise, BYU prohibits through its strict Honor Code any same-sex romantic partnerships or displays of affection among LGBTQ students. Those who break the rules are subject to discipline, including expulsion.

The school also bans any protests of those rules, a policy that came after the lighting of the “Y” brought national attention to the Provo campus.

But Tenney said her art isn’t a demonstration; it’s about trying to find space for herself and others in the LGBTQ community in the faith she loves.

When she first proposed the idea to her advisor, she recalled with a laugh, she explained that the exhibit would be about religion. “But can I make it gay?” she asked. The idea, she said, was approved without hurdles.

BYU recently moved its art department into the old Provo High School building, which came with a lot of space for galleries and more opportunities for displays. The department, Tenney said, has been encouraging all students to produce exhibits.

Walking into Gallery E, where Tenney’s work is set up, feels like stepping into an LDS chapel. That’s on purpose.

Tenney hung white curtains in the room, like those that sit over sacrament tables in the faith’s meetinghouses. “I don’t know why we always have three-inch fringe, but I even made my curtains with that same design,” she said.

The curtains are also notably repurposed out of the same white sheets that were used in August by a group dressed as angels who blocked those protesting a drag show Tenney organized as a back-to-school event for LGBTQ students.

(Francisco Kjolseth | The Salt Lake Tribune) People dressed as “angels” arrive for the RaYnbow Collective’s Back to School Pride Night for BYU students at Kiwanis Park in Provo in an effort to block counterprotesters on Saturday, Sept. 3, 2022.

And most of the artwork she created has a similar tension in it, with sometimes at odds ideas of religion and identity, love and hate, history and modernity.

Her main piece is a vibrant work of stained glass that hangs in front of one of the curtains. Tenney said that medium spoke to her because the glass itself plays with the larger imagery of Christianity going back centuries.

Inside the smaller square frames are pieces of her family history, with genealogy having a strong place in Mormonism. She replicated quilt patterns from her grandmother and great-grandmother. In other squares, she incorporated herself into the glass “fabric.” She’s got the state outline of Utah and a rainbow flag.

When Tenney said she came out as queer she felt untethered from her family legacies, like she was no longer a part of what they represented or believed in. She worried she’d be cut from the family line, for instance, if she married a woman and was ousted from the church.

On a plaque next to the stained glass, explaining the piece, she wrote: “Remaking my foremother’s quilts in this medium, and adding my own stories in the panes helped me to again feel connected to them.”

In front of the stained glass piece is another reminder of her family: a weathered wooden church pew from an LDS chapel that has been passed down for generations. It first came to the Tenneys from Canada, when a church there was being rebuilt and her family wanted to keep a piece of the old structure. In a way, she’s reclaiming it in this space, making a literal seat for herself.

Jeanne Gomm, the owner of Gomm Stained Glass in Provo, helped Tenney pull the centerpiece together.

They talked about the how glass works, the intricacy of laying it out, Gomm said, how hot and cold work together to form it. “It was great to see her symbolism come through on really so many levels,” the teacher said. “The more you think about it and look at it, the more there is.”

With the paradoxes of her identity as the theme, Tenney said, she liked pulling that in through several details. There’s a series of ceramic plates that have one phrase on top and another on bottom that can be read in multiple ways. One says, “Christ is on the margins, let us meet him there.”

(Francisco Kjolseth | The Salt Lake Tribune) Maddison Tenney, a student at BYU doing a multimedia art exhibit on the queer experience at BYU titled “Wholly Divine,” begins the process of installing her exhibit on Friday, Nov. 18, 2022.

Tenney said she cried making it, “working through these hard feelings.”

The edges are filled with blue and white designs (another nod to the history of art and religion), which Tenney said is meant to represent the beauty in those literal margins on the plates, as well as the people in the margins of the church.

Another plate is split in two. On one half it says, “love of other,” on the other it says, “love of self.” It’s based on a quote from the Bible. Tenney said you need both parts to fill God’s commandment, extending love to who you are, as you are, and to your neighbors who may not be like you.

The last pieces in the exhibit are three carved ceramic vases. As you walk around them, they tell a narrative about Tenney’s experiences. The first one starts with a silhouette of Tenney praying, which she said is from her LDS proselytizing mission in Philadelphia. It was then in 2019, she said, she realized she was queer and asked for guidance.

She said she felt an overwhelming response of divine love, the first moment of feeling accepted for her faith and sexuality.

Noticeably, the second one starts with the “Y” on the mountain and a silhouette of her standing outside looking up at it. She started the RaYnbow Collective that night, an organization she runs to support her queer classmates at BYU. And she joined in on the next two rainbow lightings of the “Y.”

There’s also the angels and the protesters featured on the third vase from the back-to-school event this year, including a tiny carving of drag artist Jaliah Jambalaya in her hand-bedazzled rainbow BYU sweatshirt. LGBTQ students and supporters are seen linking arms, as they did that night to block those yelling slurs at them.

(Francisco Kjolseth | The Salt Lake Tribune) Jaliah kicks off the start of the showcase drag show as the RaYnbow Collective hosts a Back to School Pride Night for BYU students at Kiwanis Park in Provo on Saturday, Sept. 3, 2022.

They showed up for the exhibit’s opening night this month, with 20 people sometimes packing the small room. “I love this setup,” one said. “So beautiful,” added another visitor.

She added with a smile: “Of course the glaze is from Nephi, Utah, too.”

Maddison Tenney’s exhibit, “Wholly Divine,” will be on display to the public at BYU’s art department through Dec. 6.

Editor’s note • This story is available to Salt Lake Tribune subscribers only. Thank you for supporting local journalism.