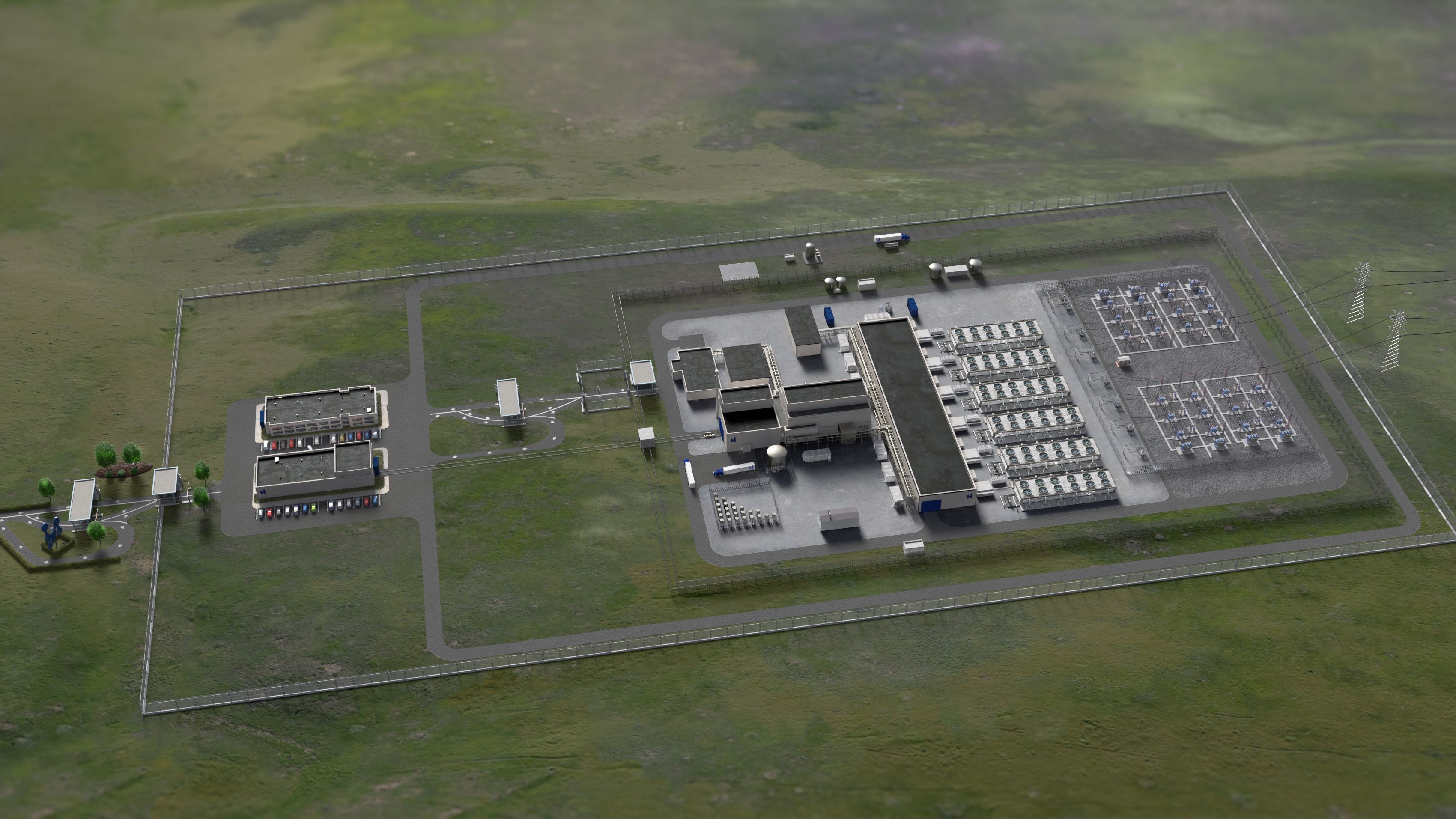 After seven years, the Utah Associated Municipal Power Systems is still pursuing a series of small nuclear reactors at the Idaho National Laboratory as their clean-power solution.

And, after seven years, they still need more company.

UAMPS, which has 50 members that coordinate on buying and delivering electricity, will soon be updating the 27 entities that have opted into the “Carbon-Free Power Project,” and the price is going up.

The CFPP, a partnership between UAMPS and NuScale Power, an Oregon company developing small nuclear reactors, had given the members an earlier estimate of about $58 per megawatt-hour for power from the project, which was well above what they’re currently paying for power. And now it’s looking closer to be in the $80 to $100 per megawatt-hour by the time it would come online in 2029.

Meanwhile, the UAMPS members who have committed to the project would only take about a quarter of the CFPP’s planned 462-megawatt capacity. UAMPS’ incoming CEO Mason Baker acknowledges that isn’t enough.

“We’re going to have to see measured improvement off the current subscription to keep moving forward with the project,” Baker said. “We’re very actively doing that.”

Baker said they are looking for partners both inside and outside UAMPS. There were originally 36 interested members, but concerns over costs and risks were enough for Logan, Bountiful and others to withdraw in 2020.

“I honestly don’t think there is anything more important than nuclear,” said Dennis Bott, mayor of Brigham City, which has stayed committed to the project.

With climate-wrecking coal plants scheduled to shut down and utility-scale battery storage only beginning to emerge, he thinks nuclear is the best alternative for “baseload” power, the steady-state demand required when renewables aren’t producing enough. And he thinks nuclear will be cost-competitive with natural gas by the time the project comes online.

Bott believes the price of nuclear will be steady and more predictable than natural gas prices by the end of the decade. “And [natural gas] still has a carbon footprint. I think it’s disingenuous to look at a 2022 price model of gas.”

Mark Montgomery, executive director for Logan City Light and Power, said his city opted out of the CFPP mainly because it didn’t want the risk of building out a “first of its kind” technology, but he acknowledges that demand for baseload power is a growing problem in the West. “As coal plants retire and demand for energy grows, we are in a difficult situation.”

He said the nuclear project is still intriguing because of that demand, but he doesn’t see Logan getting back in at this point. “Our current mayor is very conservative and risk averse.”

St. George, the largest power system member in UAMPS, never opted into the project, but it’s not because of opposition to nuclear energy, said Laurie Mangum, energy services director for St. George City.

“I think the technology is great,” Mangum said. “I have no doubts about it. I just have reservations about St. George being involved in owning the project.”

She said St. George’s situation is different than most UAMPS members because the city has relatively mild winters and abundant sunshine for solar energy in summer.

Still, she shares others’ concerns about baseload power, and she doesn’t rule out buying nuclear power from the CFPP later if the price is within reach.

Both Mangum and Bott said they would like to see more financial participation from the federal government to lower the risk. The Department of Energy has committed $1.4 billion to the project. “I’d like to see them double or triple that,” Bott said.

UAMPS spokesman LaVarr Webb said completion of the latest cost estimates will trigger an “off-ramp” opportunity for the 27 participants. And if the price estimate exceeds a certain level, UAMPS will have the option to walk away with most of its costs recouped. If they do proceed, UAMPS will issue bonds to pay for the project, and power ratepayers in those cities will pay back the bonds through their monthly bills.

Webb called it “highly unlikely” that UAMPS would end the project because other power options are also getting more expensive.

For Baker, nuclear is the only viable option for the nation to decarbonize quickly enough. Nuclear plants can be located near existing fossil fuel plants to reduce the time and expense of new transmission lines. And until a domestic supply of solar panels and batteries is developed, renewables and batteries are an uncertain source, he said.

He describes a “perfect storm” that is making the clean energy transition particularly challenging. Demand is growing as coal plants are retired and new technologies are not fully developed. Plus, electric cars are coming.

“Within our member community, we’re experiencing a lot of load growth,” he said.

The environmental watchdog group HEAL Utah has opposed the project since its inception, and Executive Director Lexi Tuddenham said CFPP can’t gain enough participants because of the open-ended financial risk of nuclear energy. She pointed to nuclear projects in South Carolina and Georgia that have seen large cost overruns.

“Baseload is important, but nuclear is certainly not the only way to meet that need — in addition to demand-side management, efficiency upgrades, and smart grids,” she said. “Battery storage technology of many types is at a stage where it can provide the reliable and dispatchable energy needed to pair with intermittent sources like wind and solar. In fact it is better and far more efficient at load-following than nuclear, which becomes even less cost effective when it is switched on and off.”

Baker points to the federal National Renewable Energy Laboratory’s recently published “Examining Supply-Side Options to Achieve 100% Clean Electricity by 2035,” which describes four scenarios for meeting that goal. Three of the four scenarios would add next-generation nuclear plants like the CFPP. The fourth scenario, called the Infrastructure Renaissance, requires the largest investments in the national power grid to distribute electricity across the country, but it keeps nuclear at more or less current levels.

Tuddenham cites the Net Zero America study out of Princeton University. That report also presented various scenarios for getting to a clean power grid, but only one relies on adding a significant number of nuclear plants.

Like all advanced nuclear designs, the NuScale approach is considered safer than traditional light-water reactors that are more susceptible to catastrophic failures. That includes more “passive” safety features that shut down the nuclear reactions in the event of seismic or weather disasters.

From NuScale’s standpoint, the project is still full-speed ahead.

“We have issued the long-lead material specifications for the upper reactor pressure vessel, and the UAMPS project remains on track to start delivering safe and reliable carbon-free energy by the end of this decade,” said Diane Hughes, Vice President of NuScale’s Marketing and Communications. She said UAMPS’ license application is on schedule to be submitted to the Nuclear Regulatory Commission in 2024. The NRC review is expected to completed in 2026, and construction is planned for later that year. NuScale declined to comment on whether the project needed more participation to proceed.

For all of its safety refinements, the CFPP still relies on the fission of uranium, and with that process comes high level nuclear waste that takes up to 250,000 years to decay to a safe level. The U.S. government has never come up with a permanent solution for the waste, which is still stored near the plants that produced it. Like all nuclear power plants, the CFPP will be paying into a federal fund aimed at developing a solution.

The CFPP is not the only effort underway to bring nuclear energy to Utah. PacifiCorp, parent company of Rocky Mountain Power and Utah’s largest electrical utility, recently announced it was considering Utah and other sites for a different type of nuclear plant that uses liquid sodium instead of water to cool the reactor and transfer its energy. It also employs a molten-salt storage system to store energy for quick deployment when wind and solar decline. The NuScale project doesn’t have that storage option, although CFPP’s backers say it can still ramp up and down as demand requires.