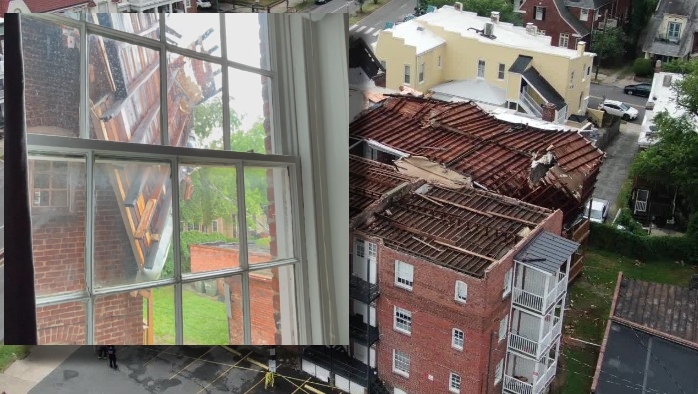 RICHMOND, Va. (WRIC) — After a chaotic Wednesday afternoon where the roof of a Richmond apartment building was ripped from its base due to severe weather moving through the commonwealth, the disarray continues, as residents work to get their belongings out of their homes.

The apartment complex at 808 North Arthur Ashe Boulevard now sits roofless and water-laden, with a sign on the door stating that the building has been condemned by the City. Without a roof, the century-old building now sits with a makeshift tarp spread across the top – an attempt of cover to keep out the elements.

Yet water has still managed to seep into various units, one of which Erin Quinlan said she was at home in when the terrifying incident occurred.

“The floor of the third floor is now the roof, so water’s going to be coming in,” Quinlan said.

Residents came back today after yesterday’s evacuation to salvage their belongings that may have survived the storm. Quinlan told 8News that anything left behind will be lost.

“When we drive away today, everything in our apartment is considered abandoned. It’s too unstable for us to be in the building for much longer, Quinlan said. “There’s no reason to cry over it. It’s a bed frame. Who cares? You know, the photo of my grandmother who I never met, that’s what matters, and I got that off the wall yesterday.”


More than 8,000 still without power in metro Richmond and Tri-Cities

Restoration crews have been on the scene at the apartment building throughout the day, but it is still unclear what will happen to the building. Residents told 8News that the management company has put them up in a hotel for the time being.