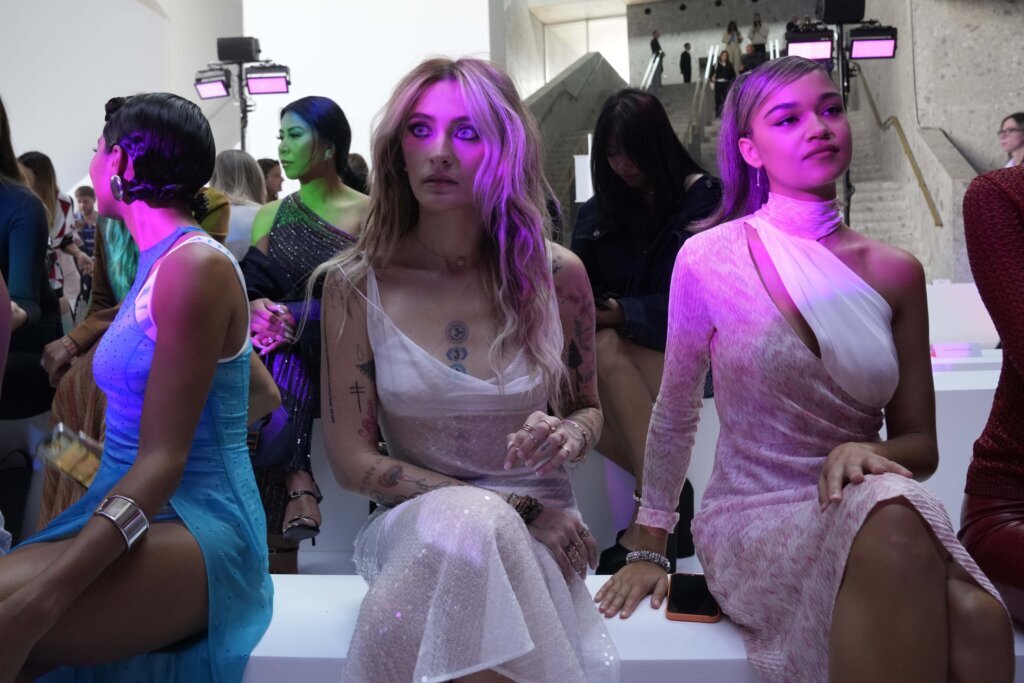 MILAN (AP) — The Milan runway was all about transformation on Friday, the third day of Milan Fashion Week mostly…

MILAN (AP) — The Milan runway was all about transformation on Friday, the third day of Milan Fashion Week mostly womenswear previews for next spring and summer.

Some highlights from Friday’s shows.

For his Spring-Summer 2022-23 collection dubbed ‘’Twinsburg,’’ Michele staged side-by-side shows inside the Gucci Hub, each unbeknownst to the other, until a wall lifted, revealing twins in identical looks in synchronic stride.

The reveal was so powerful, so unexpected, that normally jaded fashionistas could be heard confessing after that they had been brought to tears.

“I was crying too. I don’t really know why,’’ Michele said backstage. “I don’t cry often but maybe it was appropriate at the end for me to cry because it was very intense.”

“I think it is much more complex doing this job now. There are times when I ask myself, why am I doing this? Somebody is talking about nuclear war. Politics is a catastrophe. The situation on the planet is a disaster,’’ Michele added. “But as human beings the only weapon we have is to imagine something else, and to make it happen.’’

Michele said that the show was an exploration of our own inner selves, and the reveal that we harbor sort of inner-twin, who might hold us back or spur us on.

His idea of ‘’the other’’ was shaped by an unusual family arrangement growing up believing he had two mothers: his own genetic mother and her twin sister. He called both ‘’mamma,’’ as they raised their families neighboring apartments because they couldn’t bear to be apart. He said he only started to understand the difference at age 7, when his aunt died.

“I had two moms, because we all lived together, so I really appreciated what taking care of the other means,’’ he said.

Michele said presenting his collection in duplicate gave more power to the garments, each of which was styled to the eclectic standard that Michele has set to great global success.

They included a suit with trousers that appeared to be held together by garters, revealing the upper thigh, a part of he male physic rarely seen in formal dressing. Quilted floral jackets and trousers were a genderless affair. A gorgeous silken embroidered robe was pleated in the back with a trailing train. Looks were accessorized with new face jewelry with metallic fringe, also seen on sunglasses.

The notion of an evil twin was represented on the runway by motifs from the 1980s movie ‘’Gremlins,’’ in which the creatures transform to become naughty. Appearing as stuffed accessories, patches and prints, the Gremlins were meant to underline “the fear of your evil-self,’’ Michele said.

Michele emblazoned the word “Fuori!!!” on some garments in an homage to an Italian gay rights organization that was founded in 1971. Michele has spoken in the past about Italy’s failure to pass landmark legislation that would criminalize hate crimes against gays, women and the disabled, and he indicated concern over forecasts that a far-right party is forecast to dominate Italy’s parliamentary elections on Sunday.

“The elections clearly show that freedoms are being eroded little by little,’’ he said. “There was a time when we were achieving a lot. It is very complicated.”

The designers behind the Milan sensation, Sunnei, played with the idea of transformation, using twins to portray alter-egos.

One by one, models in street clothes descended from the stands, pushing their way onto the runway, then walking through a revolving door, through which returned their twin, spiffed up in a new Sunnei look.

Designers Loris Messina and Simone Rizzo seemed to be telling a youthful audience of hoodie-loving street dressers how to up their game, style-wise.

So one with a sleeveless sweatshirt and jeans was transformed into a striped green and blue shirt, worn with loose white shorts. A young woman in black T-shirt and jeans returned as an alter-ego in a long royal blue coat with white satin collar and cuffs. A pair Khaki trousers and a gray shirt disappeared behind the door, and out popped a loose-fitting lime green top with gathered pants, a sort of urban track suit.

Gigi Hadid wore a dark hoodie dress with a high slink factor. Her sister, Bella, was an unblushing bride in deep purple lace corset and crinkled satin skirt. Emily Ratajkowski wore a leather micro-mini with a tough biker jacket and studded handbag. And Paris Hilton out-strutted them all in a shimmery fuchsia mini-dress, stepping high in silver heeled pumps.

Forget muses. These were Donatella Versace’s dark gothic goddesses, representing a collection that conveyed female power in a way only Versace can.

“I have always loved a rebel,’’ Versace said in show notes. “A woman who is confidence, smart and a little bit of a diva.”

Shiny hoodies plunged into belly-button deep cowls, wrapped in a shaggy, fur-like jackets from upcycled chiffon and lace. Flowing chiffon dresses were slit high and wore over satiny trousers, the Versace logo fluttering on the long, trailing skirt. Sheer black dresses featured skin-baring cutouts. Fringe cascaded from jackets, dresses and trousers. The color palette was decidedly dark, rooted in purples and blacks, with some flashes of red, lime and fuchsia.

The show conveyed a strong sense of female ritual as models traversed a runway lit with dark candles and lined with stained glass windows with the Versace medusa head, before exiting through glass-enclosed spaces where bathrobe-clad men lounged on gilded chairs amid purple columns, underlining a shift in the power dynamic.

Haitian-Italian designer Stella Jean returned to the Milan runway after a two-year hiatus with a tour-de-force that highlighted the talents of 10 new designers of color whose design history is tied to Italy.

Jean pledged in 2020 not to show during Milan Fashion Week until she was not the only Black designer. The We are Made in Italy movement she founded with Black American designer Edward Buchanan and Afro Fashion Week Milano founder Michelle Ngomno ensured she would not be.

Buchanan opened the show with jersey knitwear with a denim feel from his Sansonvino 6 line, followed by capsule collections by the latest group of Fabulous Five group of WAMI designers, and Stella Jean’s creations combining Italian tailoring with artisanal references she sources around the globe.

Each of the new WAMI designers share a connection with Italy, either through family or by relocating to study or work here.

“There are so many Italians who are not Italians, who are immigrants who feel Italian. I think that is so beautiful,’’ Stewart said.

The show closed on a celebratory note, with the models, designers and activists gathered on the runway, clapping and swaying to Cynthia Erivo’s song “Stand Up.”

Jean implored Italians in the crowd to vote during Sunday’s parliamentary elections, casting an optimistic tone despite projections that a far-right and anti-migrant parties are likely to win.

“Do not be afraid on Sunday, Sept. 25. Our situation won’t get worse. We must trust our country,’’ she said.

The storied family-run Missoni fashion house took a fresh turn with a new creative director who looked into the archives for clues how to make brand’s fine knitwear relevant for a new generation.

Models brazenly walked the runway bra-less through sheer tops, moments that Grazioli said was a tribute to brand founder Rosita Missoni’s decision to send models down a Florence runway in 1966 Missoni was thereby exiled to Milan, its runway home ever since.

The looks featured oversized zig-zags as well as less-familiar geometric patterns from the archives. Shoes for the season were lucite platform heels with wrap around. The looks were complemented with flat silver jewelry.

Not all of the pieces adhered strictly to the Missoni knitwear ethos, including sequin-sprinkled ballet skirts and long sheer dresses, like the one Paris Jackson wore with black-and-white zig-zag culottes.

Marking the transition, Missoni employees were took up half the seats in Bocconi’s subterranean atrium, while students from the Milanese business school watched from above through plate-glass windows above.