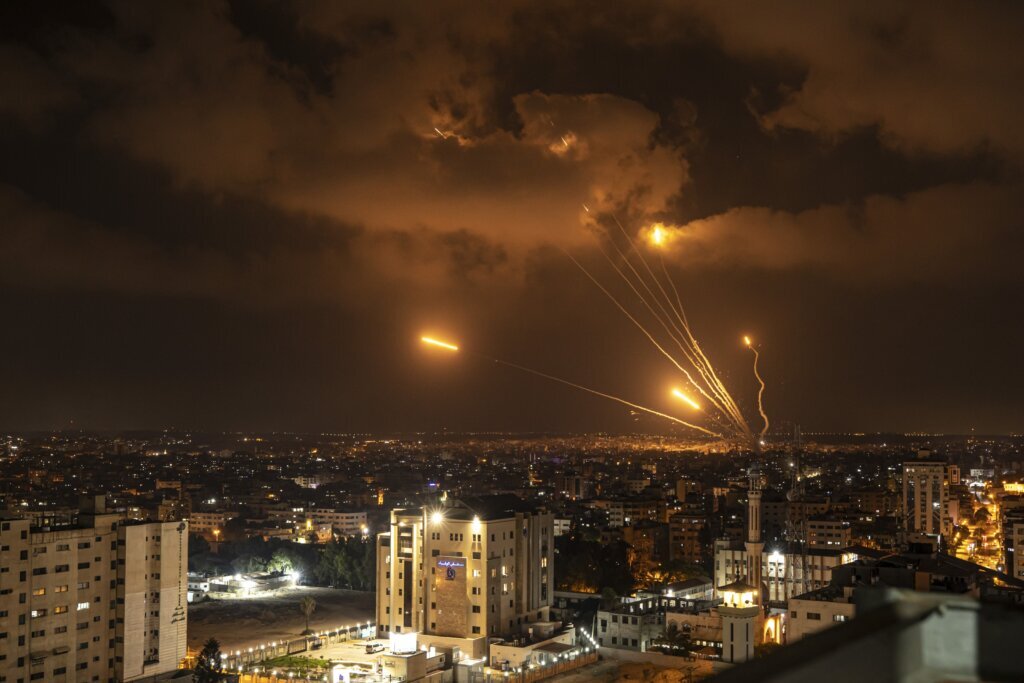 Israeli jets pounded militant targets in Gaza on Saturday as rockets rained on southern Israel, hours after a wave of Israeli airstrikes on the coastal enclave killed at least 11 people, including a senior militant and a 5-year-old girl.

GAZA CITY, Gaza Strip (AP) — Israeli airstrikes flattened homes in Gaza on Saturday and Palestinian rocket barrages into southern Israel persisted for a second day, raising fears of another major escalation in the Mideast conflict. Gaza’s health ministry said 24 people had been killed so far in the coastal strip, including six children.

The fighting began with Israel’s killing of a senior commander of the Palestinian Islamic Jihad militant group in a wave of strikes Friday that Israel said were meant to prevent an imminent attack.

So far, Hamas, the larger militant group that rules Gaza, appeared to stay on the sidelines of the conflict, keeping its intensity somewhat contained. Israel and Hamas fought a war barely a year ago, one of four major conflicts and several smaller battles over the last 15 years that exacted a staggering toll on the impoverished territory’s 2 million Palestinian residents.

Whether Hamas continues to stay out of the fight likely depends in part on how much punishment Israel inflicts in Gaza as rocket fire steadily continues.

The Israeli military said an errant rocket fired by Palestinian militants killed civilians late Saturday, including children, in the town of Jabaliya, in northern Gaza. The military said it investigated the incident and concluded “without a doubt” that it was caused by a misfire on the part of Islamic Jihad. There was no official Palestinian comment on the incident.

A Palestinian medical worker, who was not authorized to brief media and spoke on condition of anonymity, said the blast killed at least six people, including three children.

An airstrike in the southern city of Rafah destroyed a home and heavily damaged surrounding buildings. The Health Ministry said at least two people were killed and 32 wounded, including children. A teenage boy was recovered from the rubble, and the other slain individual was identified by his family as Ziad al-Mudalal, the son of an Islamic Jihad official.

The military said it targeted Khaled Mansour, Islamic Jihad’s commander for southern Gaza. Neither Israel nor the militant group said whether he was hit. The Civil Defense said responders were still sifting through the rubble and that a digger was being sent from Gaza City.

Another strike Saturday hit a car, killing a 75-year-old woman and wounding six other people.

In one of the strikes, fighter jets dropped two bombs on the house of an Islamic Jihad member after Israel warned people to evacuate the area. The blast flattened the two-story structure, leaving a large rubble-filled crater, and badly damaged surrounding homes.

Women and children rushed out of the area.

“Warned us? They warned us with rockets and we fled without taking anything,” said Huda Shamalakh, who lived next door. She said 15 people lived in the targeted home.

Among the 24 Palestinians killed were six children and two women, as well as the senior Islamic Jihad commander. The Gaza Health Ministry said more than 200 people have been wounded. It does not differentiate between civilians and fighters. The Israeli military said Friday that early estimates were that around 15 fighters were killed.

The lone power plant in Gaza ground to a halt at noon Saturday for lack of fuel as Israel has kept its crossing points into Gaza closed since Tuesday. With the new disruption, Gazans can get only 4 hours of electricity a day, increasing their reliance on private generators and deepening the territory’s chronic power crisis amid peak summer heat.

Throughout the day, Gaza militants regularly launched rounds of rockets into Israel. The Israeli military said Saturday evening that nearly 450 rockets had been fired, 350 of which made it into Israel, but almost all were intercepted by Israel’s Iron Dome missile-defense system. Two people suffered minor shrapnel wounds.

One rocket barrage was fired toward Tel Aviv, setting off sirens that sent residents to shelters, but the rockets were either intercepted or fell into the sea, the military said.

Sunday could be a critical day in the flare-up, as Jews mark Tisha B’av, a somber day of fasting that commemorates the destruction of the biblical temples. Thousands are expected at Jerusalem’s Western Wall, and Israeli media reported that the Israeli leadership was expected to allow lawmakers to visit a key hilltop holy site in the city that is a flashpoint for violence between Israelis and Palestinians.

The violence poses an early test for Israeli Prime Minister Yair Lapid, who assumed the role of caretaker prime minister ahead of elections in November, when he hopes to keep the position.

Lapid, a centrist former TV host and author, has experience in diplomacy having served as foreign minister in the outgoing government, but has thin security credentials. A conflict with Gaza could burnish his standing and give him a boost as he faces off against former Prime Minister Benjamin Netanyahu, a security hawk who led the country during three of its four wars with Hamas.

Hamas also faces a dilemma in deciding whether to join a new battle barely a year after the last war caused widespread devastation. There has been almost no reconstruction since then, and the isolated coastal territory is mired in poverty, with unemployment hovering around 50%. Israel and Egypt have maintained a tight blockade over the territory since the Hamas takeover in 2007.

Egypt on Saturday intensified efforts to prevent escalation, communicating with Israel, the Palestinians and the United States to keep Hamas from joining the fighting, an Egyptian intelligence official said. The official spoke on condition of anonymity because he was not authorized to talk to the media.

The latest round of Israel-Gaza violence was rooted in the arrest earlier this week of a senior Islamic Jihad leader in the occupied West Bank, part of a monthslong Israeli military operation.

Israel then closed roads around Gaza and sent reinforcements to the border, bracing for retaliation. On Friday, it killed Islamic Jihad’s commander for northern Gaza, Taiseer al-Jabari, in a strike on a Gaza City apartment building.

An Israeli military spokesman said the strikes were in response to an “imminent threat” from two militant squads armed with anti-tank missiles.

Hamas seized power in Gaza from rival Palestinian forces in 2007, two years after Israel withdrew from the coastal strip. Its most recent war with Israel was in May 2021. Tensions soared again earlier this year following a wave of attacks inside Israel, near-daily military operations in the West Bank and tensions at a flashpoint Jerusalem holy site.

Iran-backed Islamic Jihad is smaller than Hamas but largely shares its ideology. Both groups oppose Israel’s existence and have carried out scores of deadly attacks over the years.