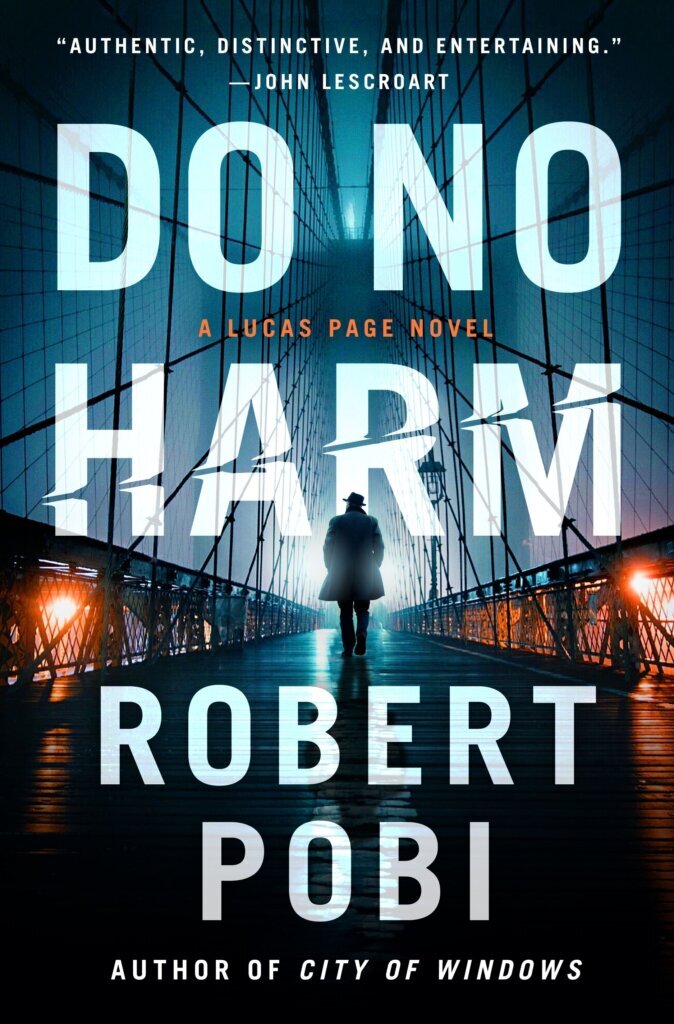 “Do No Harm” by Robert Pobi (Minotaur)

Lucas Page retired from the FBI more than a decade ago after losing an eye, an arm, and a leg in an explosion. But Lucas is a man of unique talents, so once again — in “Do No Harm,” the third book in Robert Pobi’s series — the bureau needs his help.

This time, he is again paired with special agent Alice Whitaker who, because of an incident that occurred in their last case, is walking with a cane. Meanwhile, Page’s upstairs neighbor is a double amputee, and another major character, New York City police detective Johnny Russo, has a glass eye.

The abundance of shredded body parts feels farcical, but Pobi takes a deadly serious tone with the plot, leaving readers uncertain whether to laugh with him or at him.

The plot gets rolling when Lucas, a polymath who can identify patterns in vast collections of data, notices that an inexplicably large number of New York City physicians have been dying. Readers may find it odd that a genius was required to spot this, however.

The deaths have been attributed to a variety of causes including accidents, drug overdoses, and suicide, but Lucas’s statistical analysis concludes that they have been murdered. After launching his investigation, he discovers that a handful of people have been arrested recently for attempting to kill doctors. However, none of them seem to have a motive.

Murder attempts with no motives? What could possibly be going on? Pobi has Lucas puzzle over this until the genius finally tumbles to the obvious on page 266. Anyone who’s seen Alfred Hitchcock’s “Strangers on a Train” — which includes nearly everyone who reads crime fiction — would have spotted it right off. It’s the old you-do-my-murder-and-I’ll-do-yours trope. However, in the movie there was only one murder. In “Do No Harm,” it’s happening on a large scale.

Once Lucas figures this out, he spends the rest of the book solving a mystery better suited to his talents: Who has organized a large number of people to trade murders, and why?

Lucas’s utter lack of social skills is oddly endearing, his ability to cope with his physical limitations make him a compelling character, and Pobi is a quirky and talented writer.

However, the author tries too hard to be clever, cluttering his prose with technical names for everyday things and bombarding readers with historical and popular culture references. Within a handful of pages, for example, he throws out references to Ferris Bueller, Albert Speer, Tom Waits, Nietzsche, Harvey Keitel, Zarathustra, and George and Weezie from “The Jeffersons.” He ought to cut that out.

Bruce DeSilva, winner of the Mystery Writers of America’s Edgar Award, is the author of the Mulligan crime novels including “The Dread Line.”