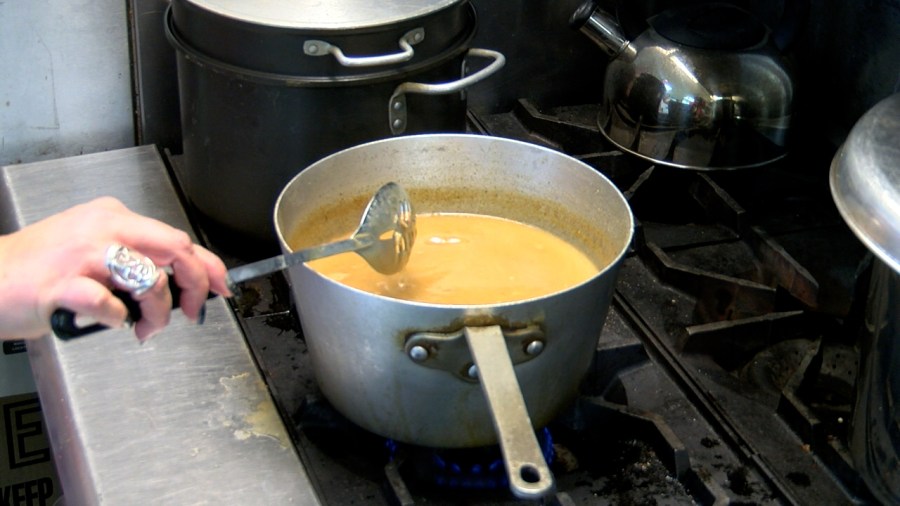 Veterans of Foreign Wars Post 1767 in Winooski has held a community Thanksgiving dinner for more than a quarter-century. Theirs was the only event of its kind in the Onion City this year.

For about 25 years, the same person arranged and set out a huge Thanksgiving spread at the post completely free of charge. She’s now semi-retired. Once COVID-19 set in, the people at the post didn’t want the tradition to die.

“Another bartender and I were talking with some of our customers, and we said, ‘we don’t have places to go’,” bartender Michelle Blais said. “So, within a matter of two weeks, we got three turkeys; everybody made a dish here at the post.”

Sam Mazza’s Farm Market in Colchester chipped in by donating a turkey and desserts. Blais and the other bartender she mentioned, Steve Bushey, came in early on Thanksgiving morning to start cooking.

“We didn’t really spread the word that much, but we’re just doing a casual dinner, just munchies, and people have a place to come that are alone,” Blais said.

They served the meal at about 4:00 p.m., which was perfect timing to settle in with full plates of turkey, ham and fixings before the opening kickoff of the Giants-Cowboys late afternoon football game on FOX 44.

“People don’t have a chance to get something to eat (or) don’t have much family in Winooski,” Jeff Myers said. “I’m one of the fortunate ones that just left my whole family — figured I’d better come down here and make sure, if they needed any help with washing dishes or whatever.”

Myers Memorial Pool in Winooski is named after Kenneth Myers; Jeff Myers is his son. He’s grateful there still is a place to turn for a warm Thanksgiving dinner, the warmth of Turkey Day companionship or both.

The Last Stop Sports Bar in Winooski has held not only free community meals, but also Thanksgiving coat and clothing drives recently. The people at the Last Stop told ABC 22 and FOX 44 on Wednesday that they were unable to hold either event this year; they want to revive both of them next year.